I interrupted my move (and fixing up of old house) with a vacation, to this hex: 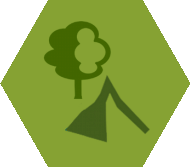 being in the Smoky Mountains for the first quarter of the month. Technically, I would have been just as correct with this, depending on how you define your hex symbols: 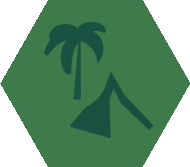 because the Smoky Mountains are actually a temperate rainforest.

Fun was had! Tubing, rafting, hiking,  horse riding. All those things we could pretty much do in our home state but only seem to find the time for on vacation...except the constant carnival which is Pigeon Forge, and the kids being old enough to have opinions on going to things there. It's their vacation too, so, there was tourist traps as well. (8d10 wallet damage, no save)

Before I left, we had an encounter at the new house: 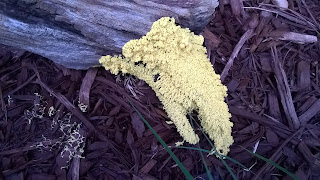 which is yellow mold. It was growing in an odd place; south side of the house which gets plenty of sun, but it's been super rainy here for a month or so, so I think moisture and cloud cover won out.

I considered sending the kids out to kill it and gain a level, but that would increase their monthly upkeep, so I did not.


Additionally, the old house is on the cusp of being on the market, so I will no longer be exhausting myself with long evenings compressing ~2 years of leisurely executed home improvements into  2 months of rushed chaos.


Amongst other things, I've been cogitating on Surprise.

John at the Wandering Gamist recently opined on Surprise as a environmental concern with traps, something I'd sort of rolled around in previously. I'm glad he did, that means I may not be crazy.

The thief, being the professional trapfinder in many genres, then ought to be good at it.

I was thinking along these lines in regards to ACKS' proficiency progressions, how a trapfinder should increase his or her skill.

The percentages aren't perfect, but they're correct for where I'm going with this.

Let's look at the proficiency progression - the Craft, Profession, Art types, where every time you take it you gain a lower throw value to identify something or know something about your proficiency:

When you're an Apprentice, your profession has the equivalent of Naturally Stealthy against you - you're more likely to be surprised by something and not have the answer to the problem at hand. At Journeyman, you are on equal footing. At Master,  you have the advantage versus your profession, and are hardly ever surprised by something that comes up.

I think that resonates with the real world application of a profession.  I'm good at what I do because I'm hardly ever surprised by something - I either already know this problem, or I am able to recover on the instant with a resolution.

A friend of mine who was up till recently a master carpenter came by to help me replace a decrepit wooden door on my old house - it exited from the garage, it'd been slowly deteriorating for ~50 years, we never used it - and it took one trip to the hardware store and some saw magic, and boom!, standard steel door placed into what was a custom opening, like it grew there.

He was not surprised by that door frame. He's a master at his profession. I would have been surprised multiple times during that encounter - I'm not even an apprentice.

So the thief, as the professional trapfinder, is then hardly ever surprised by a trap. And we can model that more or less accurately via ACKS' professional proficiency progressions, as they compare well to the actual surprise mechanic.

It's one of those hidden elegances of ACKS.