ACKS Monster: The Owlroc (with Domains At War stats)

I'm working on something right now, and I had a need for a Domains At War unit of giant owls with riders.

Paging through ACKS, I see the giant roc is the first thing that matches (giant hawks can't take riders), and that's easy enough to reskin into an owl, honestly - owls are the night shift of the birds of prey.

I got to thinking about the eyes of an owl that big, however, and to the right here is what immediately sprung to mind.

It inhabits an enormous cave, full of giant spiders it occasionally snacks on during the day. Shaking off webs as dusk settles, it glides silently out to hunt.

A small party of player characters are out on the road at night; they hear a slight swish, a scream; the flash of glowing golden orbs; exultant in the success of the hunt.

The mage and his horse have been lifted into the moonless sky, out of sight and forever lost.

That, I believe, is badass, and much scarier than a roc. You might see that roc coming.

If pressed, I'd say a vulture-roc would be the Neutral counterpart - all things equal in death, and such. Somebody's gotta eat those dragon and purple worm corpses.

Yes, I am being really lazy and boring and copying the roc stats, but for the grouping name. They inherit the regular owl's chance for surprise.

If an owlroc hits a creature smaller than itself with both talons, it will automatically grab the creature (no saving throw). If the creature is light enough to carry, it may be carried off. To escape the owlroc's grip, the creature must successfully save vs. Paralysis at -4.

Owlrocs lair in shallow caves in the sides of cliffs, hills, or mountains, in the highest elevations they can find. Abandoned mountain keeps are a favorite roost. A rare variant of burrowing owlroc is known in equatorial climates.

When an owlroc nest is encountered, there is a 50% probability that 1d3 eggs or 1d2 young are present. Owlrocs defend their young to the death. If eggs or young are captured, they can be trained as mounts by chaotic characters. If a lawful being encounters an owlroc, the owlroc will have a -2 penalty to reaction rolls, while a neutral being suffers a -1 penalty. Owlrocs are somewhat chaotic, and they prefer to deal with the same.


So! Please consult Domains At War : Battles, pg 79 for the stats for a  unit of Giant Owlrocs - the same as Giant Rocs.

I'm going to give the Behemoth Cavalry rules from pg 86 a workout to see what happens if we slap a couple elvish bowmen on the back.

We're putting bow-toting elves on the back (or whatever, elves are chaotic to me), and we're going to bard our owls (barred owls? get it? puntime funtime!).

To keep max movement, we need to stay under 60 stone. Our two elvish bowmen riding will total 32 stone, leaving us 28 stone to work with. D@W:C pg 40 tells us gigantic scale barding weighs 24 stone - so let's go with that.

Elvish bowmen are AC 2. Our owlroc with scale barding is AC 9. From D@W:C, the combined AC of our unit is then:

The barding is worth it, we'd have been AC 5 without it.

We're going to go forward assuming two elves riding - D@W tells us that will be equal to the sum of the roc and the two elves, which comes to 14+2.

There are 5 owlrocs per unit, so:

If you haven't read how Domains At War works, you might be surprised by that HP total. Remember, there's 5 owlrocs and 10 elves in this unit - a unit of actual elves has 10 HP.

It takes a lot less massed fire to take out 5 individual creatures than 120 in formation. Turns out your buddies keep catching arrows for you.

The elves contribute their ranged attacks - since there's only 10 elves in a unit, that has to be recalculated at the new density.

The elves on back launch a single missile attack at their throw of 9+.

Behemoth cavalry morale is weighted towards the creature, same as AC:

The elves' -1 morale negates the owlroc's morale - I know I'd break quickly flying around on a giant owl above a battlefield before the invention of parachutes.

I'm relatively sure the BR is correct.

Pretty pricey, all in all, to keep a flight of owlrocs in the air. They are, however, tough to hit, hit back hard, and are flying, so against the right sort of units they can certainly do good work.

Domains At War on the New Year

Historically, for New Year's, the wife and I kick the kids out to Grandma's and sit around and get shitfaced and play boardgames. The shitfaced part has kinda gone downhill the past 5 years or so, though - I think it's been at least that long that we've actually been up at the turn of the year, aside from rolling over in irritation at the fireworks.

Such is the march of time.

Domains At War entered the hopper for this year, and we did three playthroughs of the Basic Scenario in various forms.

The first game started off OK: 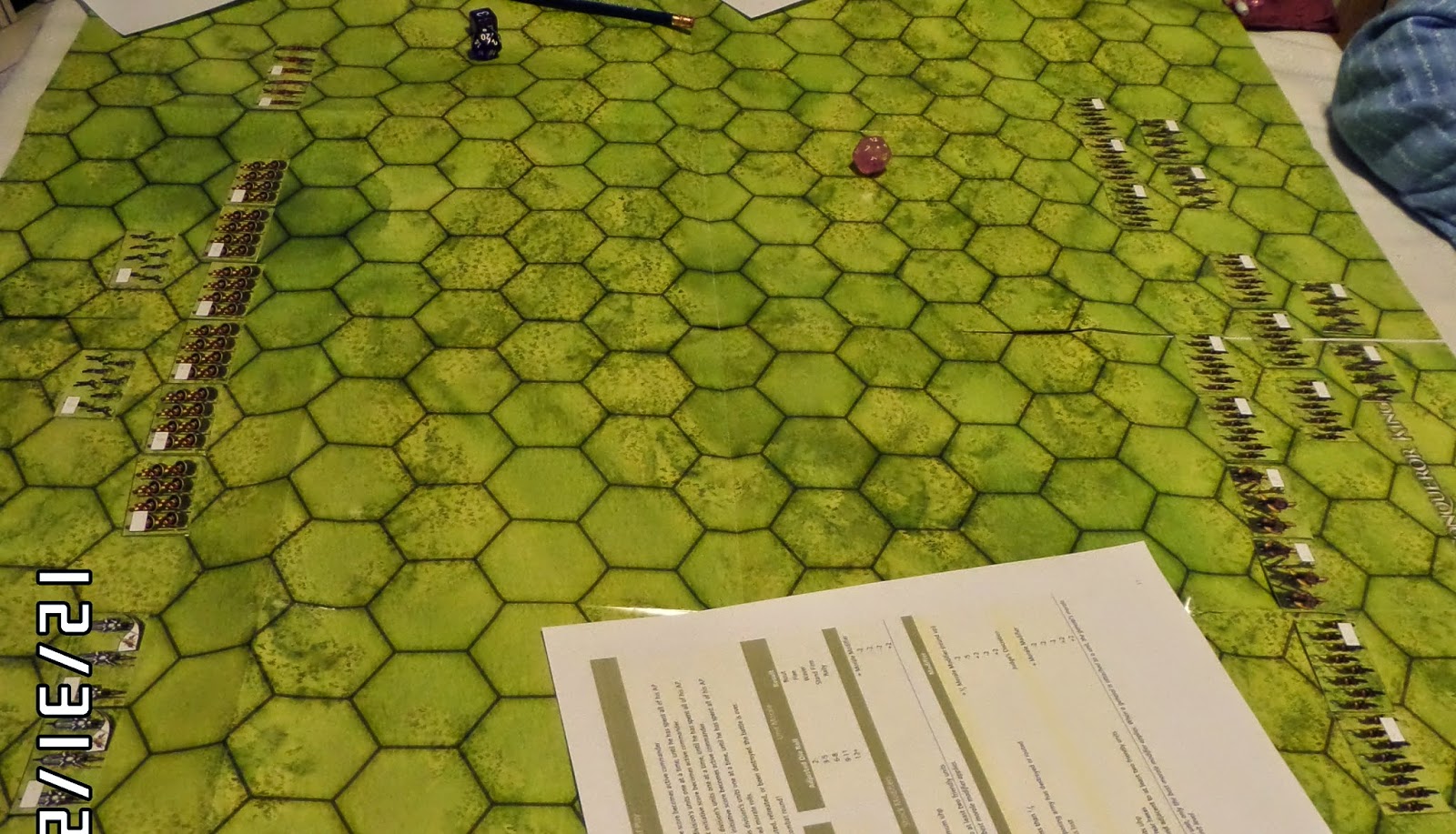 I was the Aurans, the wife chose the Beastman army. As evidenced by the date stamp I didn't know was set on the camera, this is the official first New Years Eve game.

Our hearts were in it, our minds were slowed by a good dinner out with family, a touch of drink, and the general fatigue of being old people with jobs. My wife had only just read the rules in the last week or so, and I hadn't sat and read them in maybe 8 or 10 months, having concentrated on the Campaigns book mostly.

So ... we messed up a few rules here and there - most notably forgetting that units become Disordered after damage, which really messed up the flow of unit activation and shock rolls.

That battle ended up as the below, the next morning (nothing makes you feel older than giving up on being awake at the turn of the year). 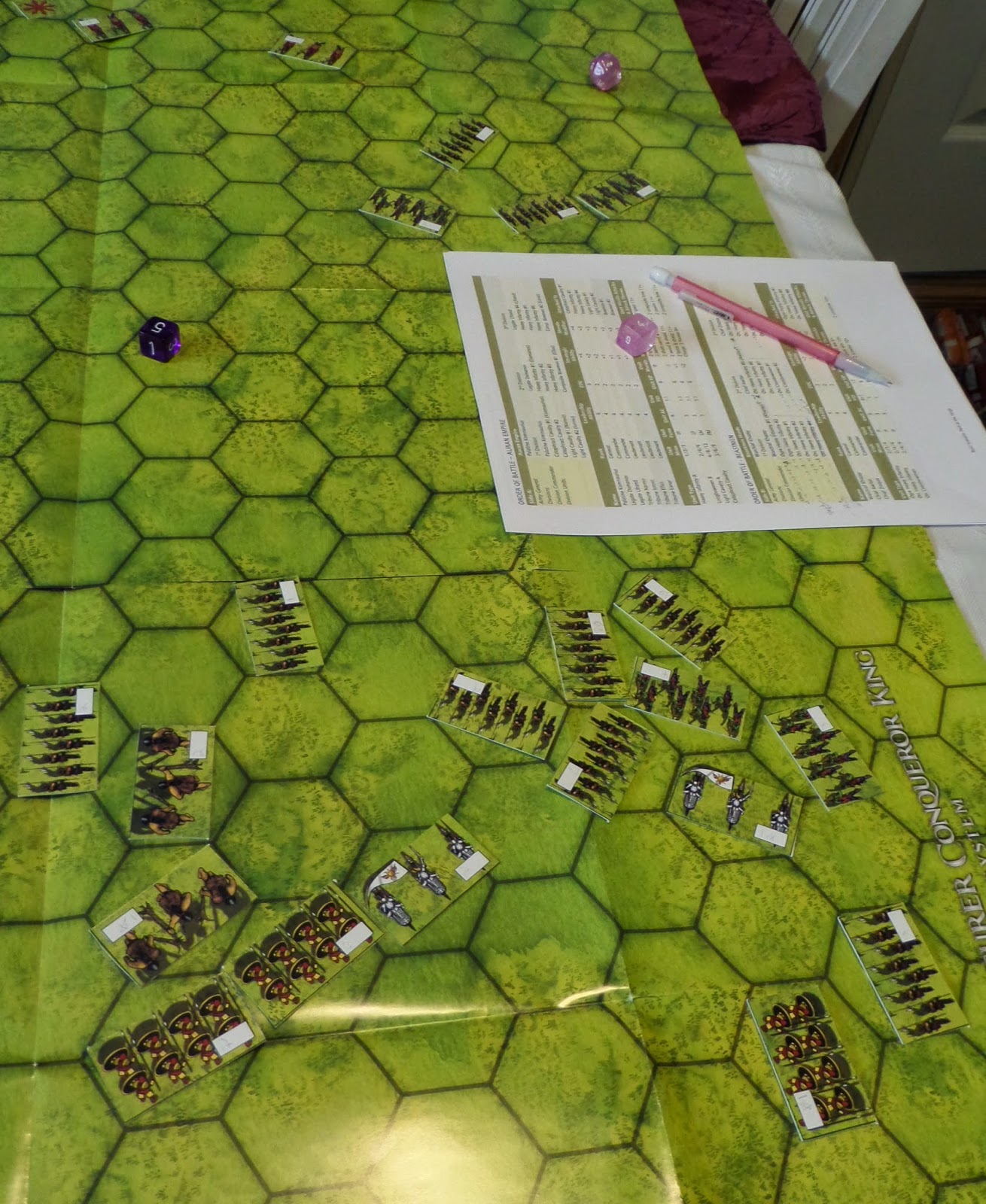 Shortly after this, the Auran army experienced a cascading morale failure, and left the field.

The second game ended with an Auran victory - they managed to eliminate the Beastman general (as he was part of a unit of Ogre Infantry, this is no small feat) and morale events took care of the rest.

In the third game, we switched sides, and added randomly generated terrain, as the Battles book instructs. We rolled randomly to get a forest hex, and did the 'drop dice' method. Ended up like so: 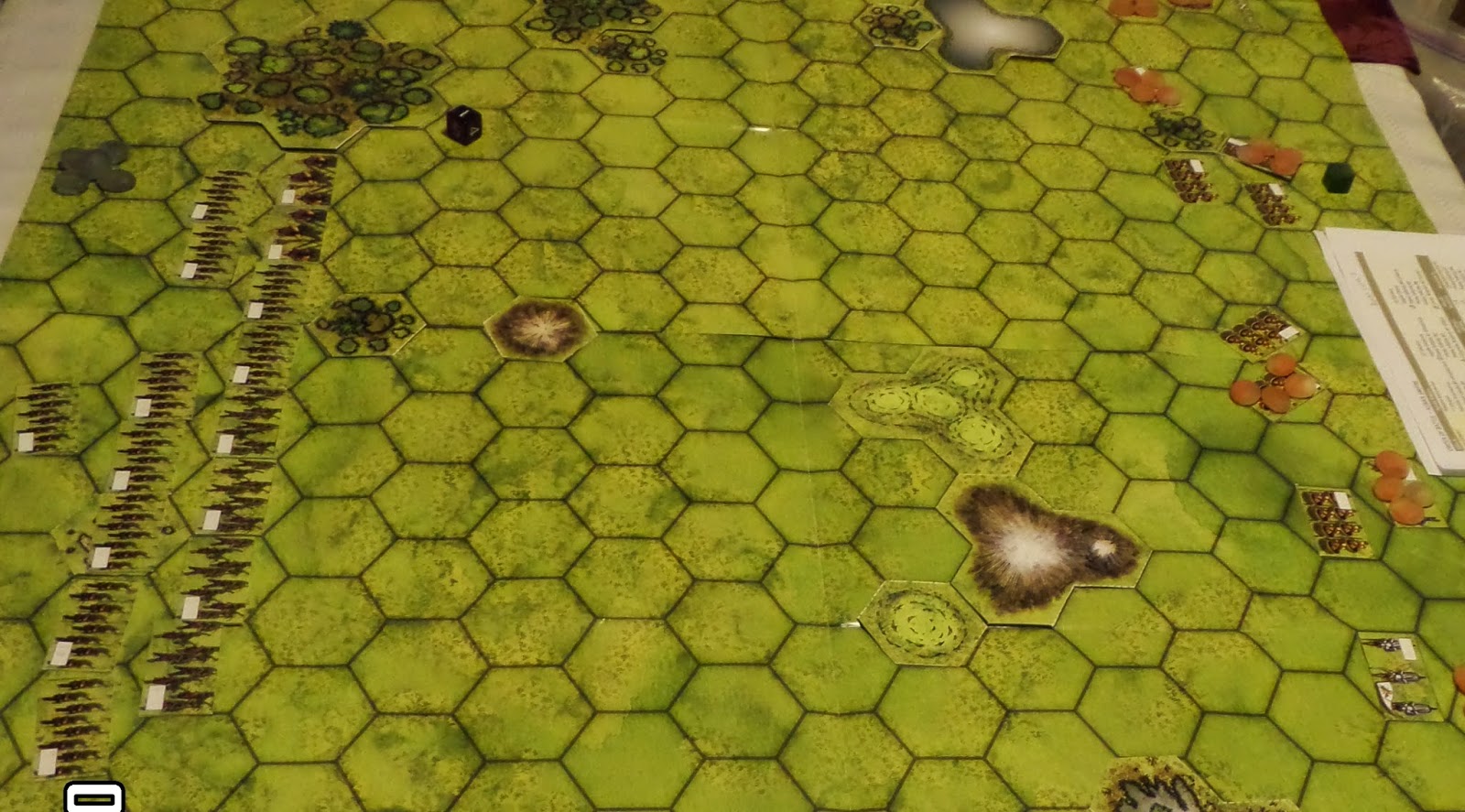 This was a Beastman victory again.

What happened here is my wife overcompensated for the terrain, and her cataphract cavalry got caught alone in that mass of beastmen at the south of their line (assuming the bottom of the image is south). I'd put my orc crossbowmen in the front of my line, and they somehow managed to get the 2nd cataphract unit to flee during their first approach. That left the Auran general alone for too long, and the orc crossbowmen and infantry were able to wrap him up relatively neatly.

At the north side of the line, the Beastmen first division (Ogres and orc infantry) advanced to stand inbetween that single mountain hex and forest hex to the north, and waited for the advance of the Auran heavy infantry - they should have advanced faster, however, as once the Auran general was in trouble, the ogres wheeled south to ensure his demise (they didn't get there in time to make a difference, the orc units managed to do the job). 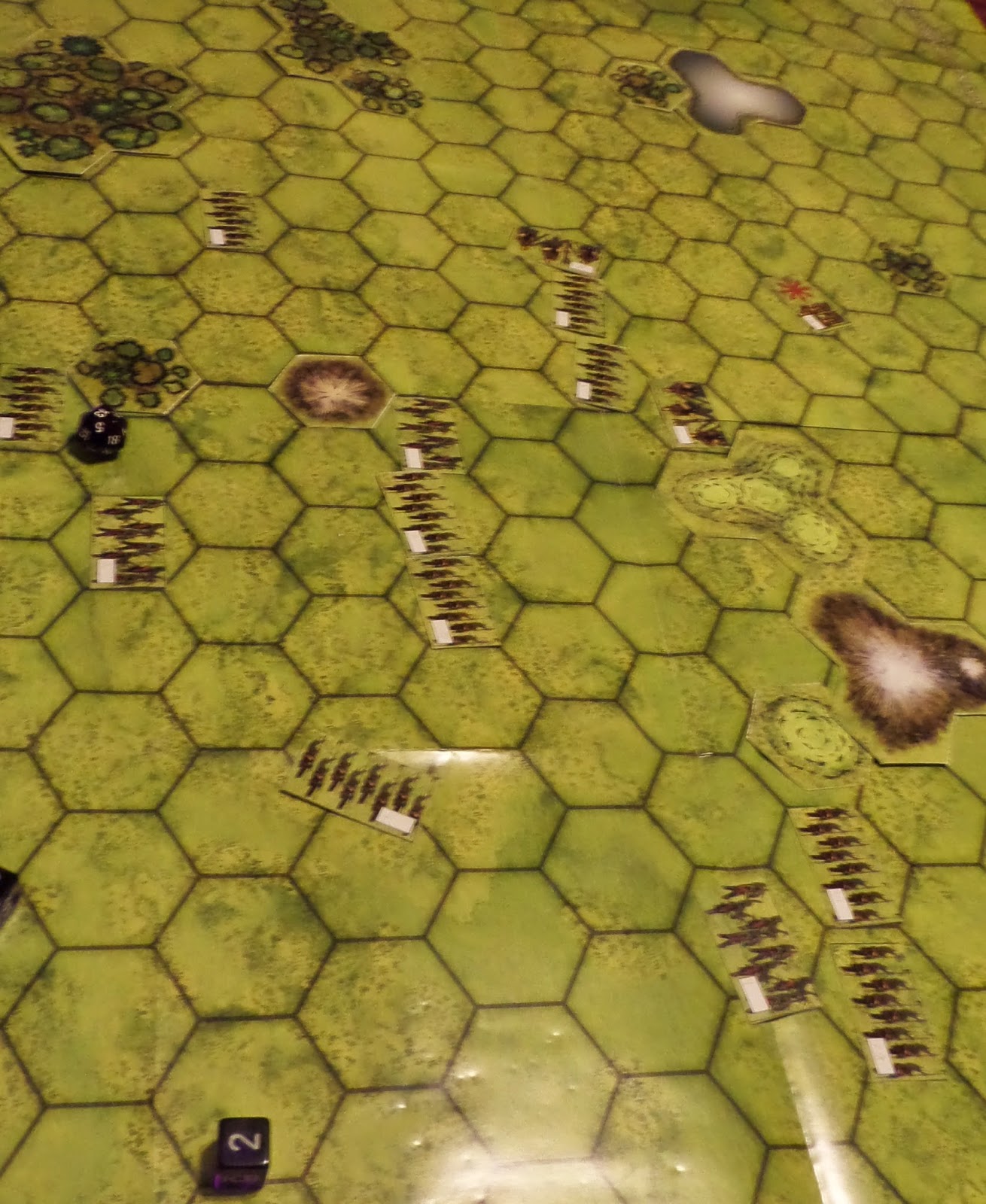 That battle ended here. The Auran cavalry had been destroyed or routed (the light cavalry had made a heroic charge across the field in support of the general, but they didn't make a difference). The Auran heavy infantry did their best, but once the ogres lumbered up to take their turn it didn't last much longer.


Some of the lessons here were:

At any rate, fun was had. The flexibility of D@W:B, as far as the essentially infinite number of scenarios that can be had, make it a good choice for a general skirmish game, even outside the structure of a proper ACKS campaign. I expect it'll get more interesting when we try out the Advanced scenario and my wife gets to experience the thrill of the fireball from a hero.

It really does scratch that itch for miniature warfare.

I think I'll start looking into options for a more permanent battlemap option; tokens and markers too. I've done some preliminary research and nobody makes prefab'd wooden rectangles of the proper size (see my post of making battlemap tokens) so I'll either have to go custom, go different, or give up on that.

The other game we played was Ares Game's Battle Of The Five Armies; these are the guys who now make the War of the Ring game. It plays well. If you're familiar with War of the Ring, it's a lot quicker, for one, and they've done some good work keeping the same general feel of the mechanics of WoR while scaling everything down to a single battle. If you happened to own the 1st edition War of the Ring expansion game "Battlegrounds", it plays a lot like that, just a bit more refined.

I do wonder if anyone has a good handle on how many troops were involved in the BoFA, just to see what a Domains At War: Battles scenario would look like.

If this site is to be believed we're looking at:

This is somewhat muddled by Tolkien's Orcs and Goblin terms being somewhat interchangable, though I expect if we're using D@W Goblins we'd be ever so slightly better off since they have 2 less hit points per unit.

The 13 hero-dwarves and Beorn, unencumbered by leadership duties, might be a lot of fun, and the  Eagles are going to clean house...this may just be a quality over quantity occurrence.

All in all, though, the goblin army routs when Bolg is slain, so it's a very D@W:B-compatible outcome.