"Death is an inevitability, isn't it? You become more aware of that when you get to my age. I don't worry about it. I'm ready for it. When I go, I want to go doing what I do best. If I died tomorrow, I couldn't complain. It's been good."


They just don't make them like this anymore.  I know, I know. I'm doing the "old man kids these days" sort of deal.

No, I'm fucking not. Pack it up - rock and roll is over. It's been done - it's a solved problem. Lemmy finished it for you, and you're fucking welcome. This is rock in an elemental, raw form - they are musicians first and foremost, and you can fuck right off with anything else.


And it's always a fucking blast.

UPDATE #2: Additional bonus goals have been met. If the project ends above $25,000 by the end of the campaign, all the additional monsters and lairs from the higher stretch goals will be included.

UPDATE: As of this writing, Lairs & Encounters is on it's way to it's 4th stretch goal, adding more maps and lairs than before. In addition, the Guns of War goal has opened, and each backer will receive a PDF of that product as well!

So, with the delivery of my Sakkara book, I now have the complete collection of ACKS product: 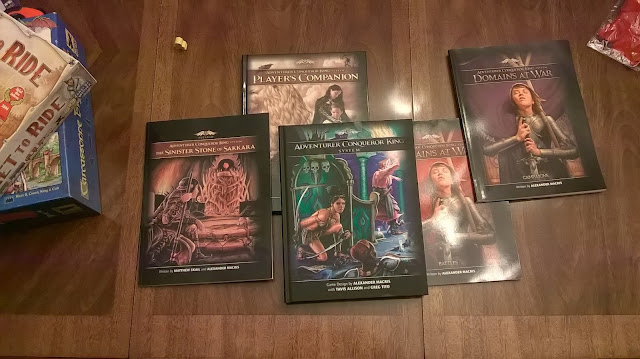 Shown here with the detritus of Thanksgiving family holiday game playing. My mom and sister got impressively cut-throat during their first introduction to Ticket To Ride.

So, yea, right? That's pretty cool- finally got a physical copy of ACKS and the PC along with Sakkara. Kinda wish I'd sprung for the D@W hardcover, but, eh. I think it'll work out better in the long run, as they have different functions.

And that's it, then, the whole ACKS collecti.....wait, what? WHAT? WHAT IS THAT? BY GAWD KING THAT'S ALEXANDER MACRIS'S MUSIC!!

At the time of this post it's just about reached it's first stretch goal. I want you to pledge because I want the second-to-last one - the monster class creation rules.

I've gotten a look at it.

This is the main engine of the product. 135 well-crafted lairs - these aren't simple holes in the ground with some tunnels behind them, but actual interesting locales - from the 3rd update, the first stretch goal achievement:

That's a challenging location; beyond just the threat of the dragons and their spawn. Each entry has some little hook in the structure or landscape that either is just plain evocative, gives some challenging operational problem, or provides an entertaining arena for combat.

I imagine a lot of these as scenes from unreleased Harryhausen movies - heroes encountering monsters against a cinematic backdrop.

Also notable, many of the lairs connect to each other in some way - a map found in one lair gives clues to the existence of another, for example; thus encouraging more exploration.

The expanded treasure types ACKS details are put to full use in the listings.

This is the Wilderness Adventures portion; the steering wheel to the lairs engine. It's a whole exploration engine, really, you can use this to simulate a small party looking for just about anything, and complements Domains At War's reconnaissance rules.

This section finishes off several chapters in ACKS; both on the player and GM side. I think we'll be about at the point one could write an automatic hex map generator.

Monstrous henchmen are also covered here - anything from a ranger's wolf to a paladin's horse or that roc that's always showing up to bail the wizard out. Or the infamous kobold Meepo, favored of many a party who played through the first 3E adventure module series. Advancement is covered as well, so many monstrous henchmen will see extended service times alongside their leaders.

Ability scores (very rationalized, not the mess that d20/3X was) give you ways to offer exceptional opponents or allies. (spellcasting dragon with an INT bonus...)

Young and old monsters are covered, giving a bit more detail in lairs, and capturing something like a griffon young helps with the next bit:
.

They ain't lyin. If you wondered how some of those exotic Domains At War units happened, this is it.

The options are impressive. For players that prefer 'pets' to henchmen, this whole section is a wonderland. My wife, ever the druid, will have a field day with this, likely sinking her whole fortune into a hippogriff farm.

It's the little things, sometimes: Each creature gets a diminutive name (like puppy for dog) - the Sprite's diminutive is "pixel", which for those that get the joke, it's very clever. Trust me. Just wait till you get to the Oozes.


This is a pretty subtle system. You can certainly eyeball a new monster out of comparing them to other similar monsters, or slapping new abilities on existing monsters and reskinning them.

This actually takes you from the ground up - you make some fundamental choices about the power, type (animal, fantastic creature, humanoid) shape (body form) of the monster, and go on from there, ending with lair organization and treasure types.

There's support for randomized abilities; so if you're looking for something new, but don't know quite what, working towards or backwards from that point may provide inspiration for something fresh.

It's not point-buy, like the Player's Companion spell or class builders, it's more of a workflow. And you end up with a monster that's well balanced against others of it's HD, plus you've got the extra information about carrying capacities and such (based on body form!) so you can immediately put your monstrosity to work in Domains At War pulling artillery or charging walls.

This is by far the most broadly usable offering Autarch has produced - lairs & encounters are literally the dungeons & dragons of the game. (The Player's Companion a close second)

The lairs are, obviously, usable by any fantasy game - the monster statistics from your system of choice are a drop-in replacement, and there can't be any argument with the more varied treasure that ACKS produces in it's treasure types.

The maps will be drawn by Simon Forster; whose Patreon can be found here; and made a smaller Book of Lairs for ACKS earlier. It's all really good work.

It'd take a while for the most active of groups to get through 135 lairs; and there's enough inspiration hidden within the lair listings that slight variations to the same listing with a new monster will feel fresh each time. I'd have to do the math, but there's probably in the high hundreds of thousands of XP, if not over a million, awaiting players using only what you find in here.

The additional monster interaction mechanics are universally adaptable - even for non-OSR games - I see no impediment to using this with 5E or Pathfinder. There's enough variety in the ACKS monster listings that I'd expect you could find an analogue for any given monster that may not have statistics given.

Monster creation should be usable for anything that's vaguely D&D compatible, after whatever light conversion is needed to take back into your system for AC or morale scores or what-have-you. There's enough little monster Rosetta Stones around.

Autarch is once again producing a heck of a resource that will give you just as much back as you want to pull out of it, at a great price - and the more folks we get in it, the more it'll have to offer everybody. This has the potential to be one of the strongest wilderness adventure products put out for the game.

Email ThisBlogThis!Share to TwitterShare to FacebookShare to Pinterest
Labels: Autarch 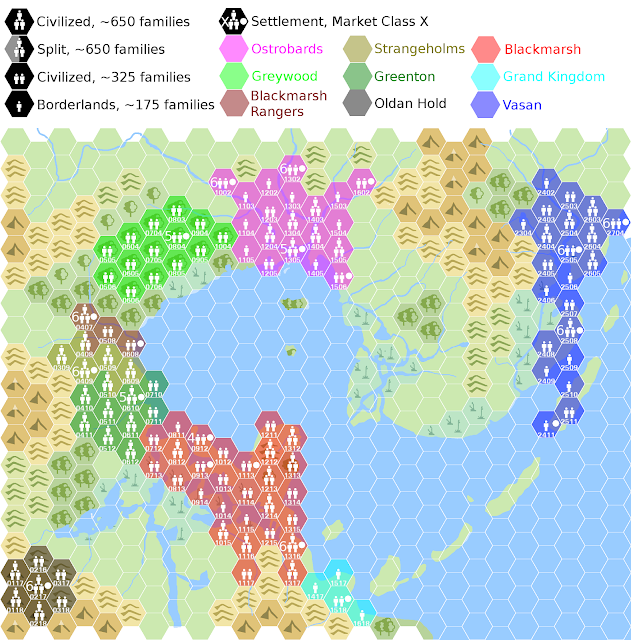 
A year ago, I folded the sometimes confuddling methods by which stealth and surprise are achieved into a single table. Amongst other things, it showed that the chances of one's novice thief sneaking up on a target isn't as woefully ridiculous as assumed from looking at their Move Silently/Hide in Shadows chances.

John at the Wandering Gamist noted I could add the monsters who grant a -2/-3 penalty to surprise on my Unified Stealth/Surprise tables.

I also thought to add the chances using Difficult To Spot in both brush and dungeon; that's more-or-less Hide In Shadows. Percentages are calculated as if Move Silently always fails.

I'm going to do four new tables, assuming I haven't corked up my spreadsheet coming back to it after a full 12 months.

First, the main tables with that added, target without alertness:

So there's that - I think just giant chameleons and shadows effect a -3 penalty to surprise, where at -2 there's bugbears and tigers and troglodytes and such. -1 is barbarians and some other things.

As a combined table:


Combined table, victim has a +1 to surprise:

Combined table, victim has a +2 to surprise:
Nothing truly revolutionary there, but, for completion's sake. Against an opponent with a bonus to their surprise roll, the best strategy, obviously, is to disallow them the roll.

Again - what the thief is is a manager of surprise, as the class has the ability to cancel out Hear Noise, which generates a surprise roll.

I still think there's a way to fold up Hear Noise, Surprise, Move Silently, Hide in Shadows, and at least Find Traps into some master "Global Surprise" mechanic. I've touched on it one or two times, and the aforementioned Wandering Gamist did so as well.