Have I ever mentioned I had started making tokens around the time we introduced the kids to gaming? I know I haven't mentioned how I make them.

Let's do that. It's been a long ass time since I had an Arts & Crafts post.

From Woodworks Ltd. I ordered a range of different wood shapes, mostly circles. As we'd started off in Mutants & Masterminds; a d20 product, creature scale was a defined thing - Small, Medium, Large, etc; on a 1 inch scale for Medium. As I thought we might branch out into a d20-based D&D at the time, I also made preparations to support "Long" creatures - so a wolf is Medium Long.

The kids love them. I was actually surprised, I didn't think they were that cool; just pictures on wood discs. There was a small combat at the beginning of a session that really didn't warrant using anything and they were disappointed I didn't break them out to use.

Anyway. Here's what I bought for what:


There's a few types I haven't made anything for  yet - never have gotten larger than an Ogre on the humanoid front. As 'beastmen' were 'humanoids' in d20, I'll leave them unpainted - the majority of opponents may be beastmen and the like, so saving paint by leaving those and other humanoid types is a good choice.

The construct color is actually a metallic silver that comes out real nice. It's likely if I ever made Elementals I may color them by element; and I may use the Fey 'tan' color for Giant Humanoids. And I'll keep plants green, I think.

Ooze will be a tough one. Rustoleum's not gonna give me a "gross" color :) Play-doh would be more fun anyway, and there's plenty of ways to procure a clear plastic cube for a Gelatinous Cube.

On a piece of paper, trace around all the token types you elected to use in pencil. Scan this in, so  you have a full sheet of "borders" for each type of token, at actual scale. That'll look like so: 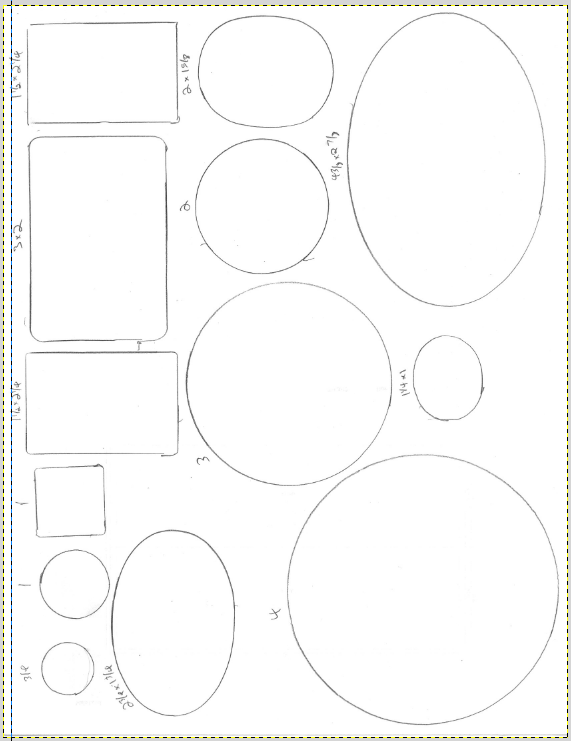 I wrote down what I traced so I'd know, now, almost two years later, what the hell I was doing.

Decide what you're going to make.

Flying monkeys, let's say, when not under control of a sorcerer, default to being dangerous fuckers who collect shiny things - blame it on the bird DNA fused with simian curiosity, perhaps someone used a crow or magpie, to include old wive's tales. They're well aware humans carry lots of shiny things, so, it stands to reason they'll have a collection of good stuff - coins, gems, metal items that stay shiny because they're magic. And you'll hear of merchants being attacked and stolen from in large clouds of them; or a smaller troop quietly flying in the night to sneak through the covered top of a wagon, looking for the good bits.

I imagine these things with mean mandrill faces, shocks of unkempt feathers sticking out from around their heads like a turkey's tail. Long wings, vulture-like up on the shoulders, a wide span. Their tail would be prehensile, but covered in short feathers they could stiffen out during flight, so it'd end up looking like a fake Christmas tree branch.

Unfortunately I don't have a lick of artistic talent.

I can GIMP something up though. A GIS for 'flying monkey' gets me a lot of results - the one that strikes me though is the ones from 'Once Upon A Time' -  it's got the color and build I want, and it's not wearing a little valet's suit. As a bonus, mom and the eldest daughter are totally into the show (and the youngest has gotten hooked since Elsa from Frozen has shown up...very crafty Mouse, very crafty.)

I find a likely screenshot, and cut out the background. I search 'mandrill' and find a face that has the pose I want - a nice off-center shot, mouth agape, issuing a challenging scream.

You ever seen a mandrill in real life? They are mean looking dudes. That facial coloring is something else in person - pictures just don't do it. In person you get your brain's facial recog subroutines going and it's just unsettling - wonder no more why we used to (and still do) paint our faces.

I'm aided greatly in my efforts by the fact this is going on a 1 inch piece of wood - the small size will hide anything I do wrong.

I end up with this:

which is pretty vicious if I say so myself. I lightly desaturated the lower part of the mandrill's facial fur (it was a brownish) into a stained grey, intimating it uses those jaws, messily. I couldn't decide if I wanted to change the facial skin colors or not. I'm not sure I can do better than nature on that. I figure any given wizard could customize them to match their heraldry - that'd be fun.

Anyway. I decide to make 16 of these things, since there's no point going out and spraypainting less than 10. I cut and paste the 1 inch circles until I've got 16 of them on their own layer. Take them down to a ~30% opacity - you want them to print out very lightly. I print that out by itself - this is the back of the token sheet. You want to make sure you ignore margins - if you don't, your outlines and images will be scaled down. Test this!

I then copy that layer, and flip it horizontally. On another layer, I start copying my monkeys, placing the picture over each circle in a way that looks nice. That looks like the below. Make sure your pictures overlap the outlines! At least by 1/4 to 1/2 an inch, depending on the size - consider your own manual dexterity. Later you'll be trying to place these tokens on a sticky piece of paper without misaligning or getting glue all over your fingers, so you want a little room for error.

You're also going to be tempted, like I was the first time, to crowd a whole bunch of these in one page - don't do it. The paper is the least expensive part of this project, and it's a pain in the ass to place the tokens on the glue when they're all crowded, and it's almost impossible to move the paper after you've glued it if it's weighed down with ~40 some odd tokens. ~24 or so of the 1 inch tokens is a pretty good maximum. 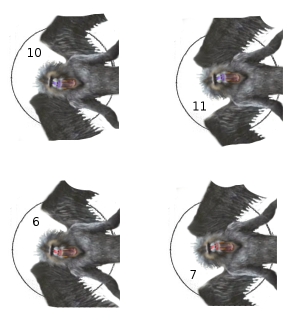 Notice the top two have different noses. Before I did the final 8, I took the first of that set, selected the facial area, and adjusted the hue, to turn the red more purplish.

It's a really easy way to get some variety in a set of the same creatures, so it doesn't look like a clone attack every time you bring a group out. It's the token equivalent of changing a weapon or stance in a miniature.

I also number them, so I can keep track of what's what on scratch paper, as far as damage or effects go.

I print this out on the blank side of the page we previously printed, after hiding the layer that has the circle outlines. You don't want those outlines on the front - you want a clean blank edge.

Now, when that's printed, you should be able to hold the paper up to a light and see how the images and outlines line up. You really want to test this a few times for your system and printer with a test set of images. For example, I mentioned above it's been a couple years since I made these. In the interim, I bought a new computer - for whatever reason, I was an eighth of an inch off to the left on the outlines lining up with the images. Between driver differences and a new version of GIMP, something changed with how things printed.

Next - time to glue. I use a spray adhesive, 3M's Super 77. Spray adhesive keeps you from having to worry about bumps from the glue. 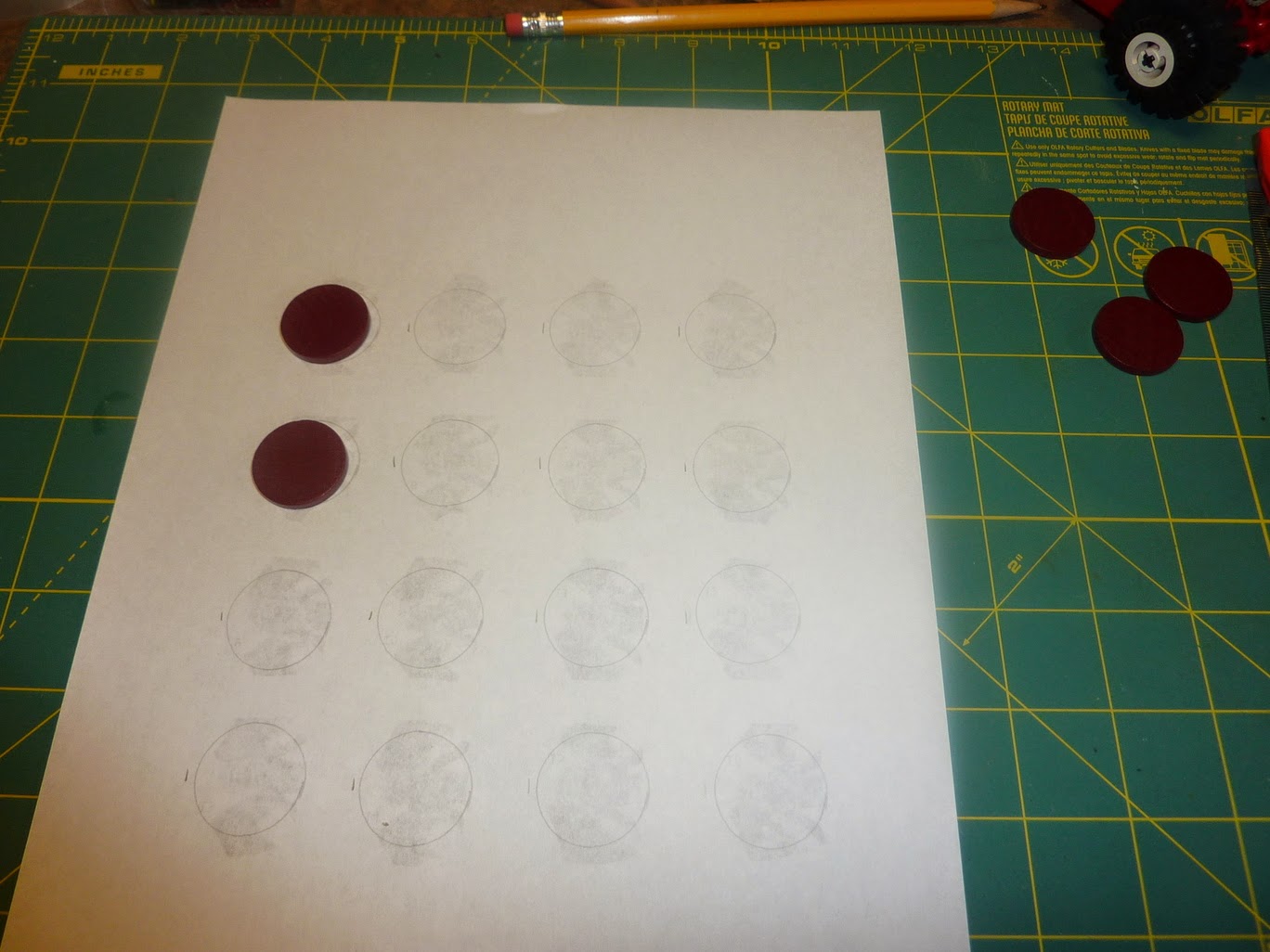 Obviously, you should do this in a well ventilated area, the picture I show here is illustrative - I moved all this out to the garage to do the gluing. You can see through the paper a bit to see how the two sides line up.

Give the paper (outline side) a good spraying, I do a couple slow swipes, it's probably too much but, hey. Then, carefully, quickly, and with minimum panic, place your tokens on the sheet, in the outlines you gave yourself. A little misalignment is fine, that's why you overlapped your pictures. Give each token a firm press after you place it.

You can move them after you've placed them if you haven't pressed, if you're quick and careful and really messed something up (I placed one paint-side-down once the first round).

Once they're placed, move the paper. If you're like me, you may have gotten some glue spray up underneath the paper on the token side (another good reason why you don't crowd tokens at the edge of the sheet). Move it around a couple times in the next 10 minutes so the glue on the underside doesn't set on whatever you sprayed on.

Let it dry till it's not tacky to the touch.

Here's the laborious part - cutting them out. Get yourself an X-acto knife and carefully cut around the edges of the wood - you may shave off paint and wood around the edges, just be careful. 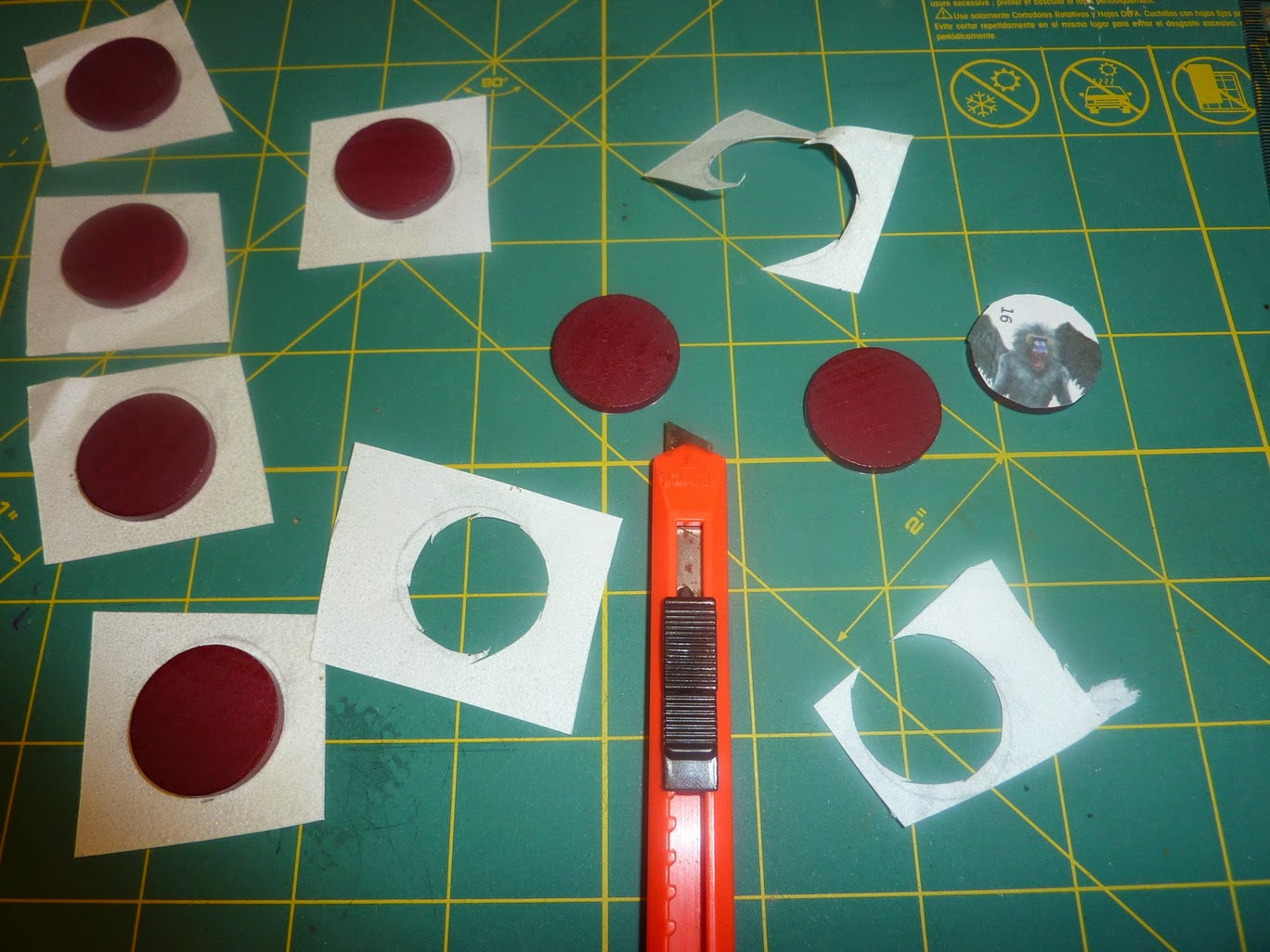 Take a high-grit sandpaper and sand the paper edge a bit; lightly, now; that'll get whatever chaff the knife left on. Do it at a high degree angle to the edge so you don't sand off your paint.

Finally, I take mine back out and give both sides a coat of clear matte spray, to protect the paper. 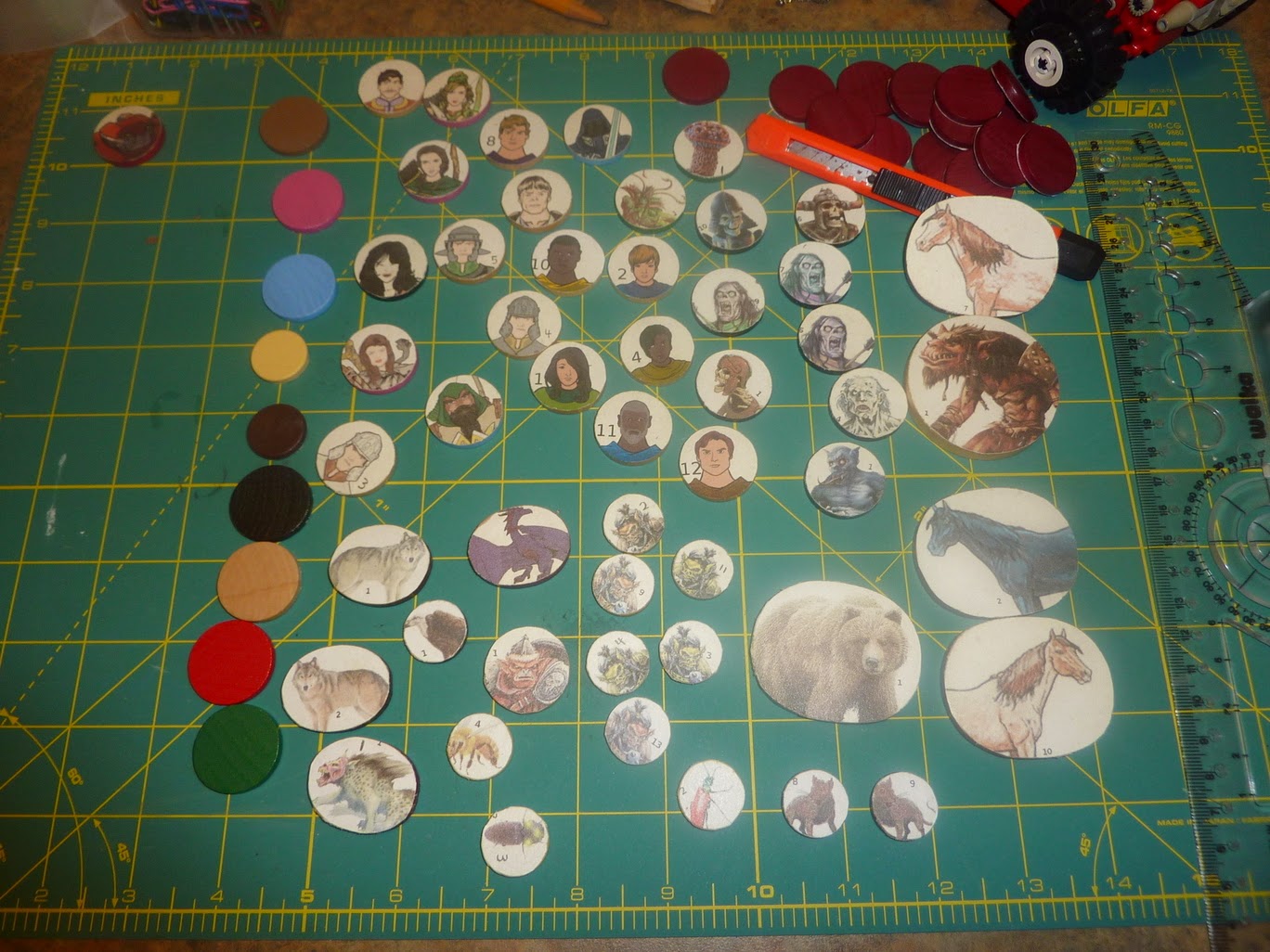 And here's a selection of my tokens. That guy in the upper left is from Mutants & Masterminds - he's a Black Manta sort of dude.  I've got a lot more of the M&M guys, I'm just not real sure where the rest of them went.

A lot of these are clips from various WotC sources. Note on the zombies and goblins how I used the hue+saturation tool to mix things up a bit visually. I'm looking forward to 5E product basically so I can get better art sources...

The human headshots are all from HeroMachine. There's various PC tokens and then a small set of "human fighters" for general mercenary sort of use.

Let me know if you try it out, and how it goes.