A Number of Irelands


In looking at various ways to abstract the game down to its fundamentals, one starts looking at things outside the rules a bit - or, things that start to intrude on the fiction of a game world.

In a system where building strongholds and ruling lands is a thing, one might step back and ask how best to enable it - what ought one do to provide the opportunity?

The guidelines say something like this, when talking about the status of a hex as being civilized, borderlands, or wilderness:

Now - some of the above relies a bit on the assumptions that settlement patterns and the general traffic of "civilization" tend to tamp down on the occurrence of wandering monsters - the bellwether of hex status, and makes no nods towards the realities of terrain, etc. We will assume for the moment this works as stated. 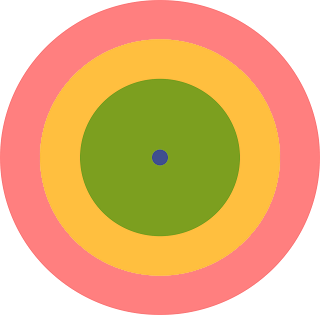 and there's the map. Blue is our little center large town. The green bits then are the 50 mile radius around that town that is civilized by default; then the yellow is our borderlands, and the red our wilderness, as we have to end it somewhere, and another 25 miles out is fine.

Our landmass is the platonic ideal of such things for campaign purposes - a disc 200 miles wide. If we look at that through a lens of high occupancy, if not maximum:

You can see that the consecutive areas of C/B/W embiggen, because geometry, and there's about twice as much wilderness as there is civilized area.

233K families is a principality. We're looking at a Class II city there in the middle, 4 or 5 Class IV large towns (which would kinda bulge out the civilized area, but we'll deal with that later), then maybe 12-15 Class V's scattered at the edge of the borderlands.

More realistically, the totals may be more like one half or three quarters those levels; perhaps a Class III city as the centermark, with the outlying cities barely reaching IV status.

The demographics of either of those aren't horrific - you're looking at a 10th to 12th level NPC at the top. A party that's focused on their goals can knock that over and take control - or at least gain enough for a credible shot at independence. Or, if we're setup already with a set of independent smaller domains, perhaps conquering one and uniting the island from there is on the menu.

Out in the interwebs there's the idea of measuring things in the number of Libraries of Congress, as far as data goes, or the number of Rhode Islands, in terms of area.

For this, however, we might state that for a campaign maybe all you need is the minimum of one Ireland... 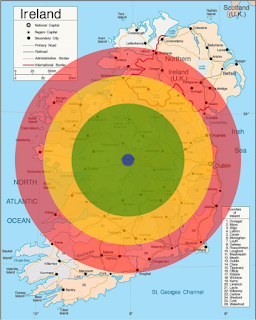 ...in order to  have a compelling space for a set of would-be conquerors to operate in.

As I recall, Jack Vance's Lyonesse was near the size of Ireland - so - I find myself in proper company.