Glen Cook's Black Company is one of the cornerstones of modern fantasy - an epic story focused on the actual people who live it, members of an elite mercenary band tossed around by forces more powerful than themselves.

What would it take to emulate this mercenary company in ACKS?


I think we've got everything we need now with Domains At War to do it - so let's figure it out.

First off, how many were in the Black Company?

It's a difficult question to answer - membership varied in the background between events. From Green Ronin's primer in their Black Company Campaign Setting, I can say there were at least 96 members when the Company parted ways with the Lady after Juniper; that's the only number in the primer, so I'll assume that was taken from the books themselves (to save me from having to thumb through all of them)

As an aside, Green Ronin's production on the Black Company setting was pretty good - it's my favorite d20 adaptation of a fictional world, second only to Mongoose's treatment of Conan (the d20 version).

There's a few clues here and there in the books, though.

The ship’s size impressed me more than did its flashy sail. The four minor wizards we had with the Company could match that showmanship. But I’d never seen a galley sporting five banks of oars.

Now, note Croaker says "5 banks of oars" here. In other sites, I see the reference to this ship as a quinquereme. A quinquereme is understood by Wikipedia to have 3 banks of oars; the top two oar banks having 2 rowers apiece, and the larger polyremes being variations on that theme, adding more oarsmen to each oar, rather than increasing the number of banks.

I'm going to go with this being an anachronism on Cook's part, as I really don't know what the state of historical knowledge on Hellenistic warships were when the book was penned.

This being a quinquereme does peg the Company as an actual company - 120 men, plus officers, a couple wizards, and such. The Company leaves their horses behind - that tells me that the ship isn't ridiculously huge.


They were an elite band. What else can we drag out of the text that might pin some of them as anything more than veterans? There's some bits during the final battle with Harden's forces that can help here.

"Pull a company out of reserve. Take them in flank," the Captain replied. "Hit them hard, and stand fast. They won't expect that. It'll shake them. Make them wonder what we're up to.""Yes sir." Elmo turned to go.

Elmo, our humble sergeant, can take a company sized unit out of the reserve on a tough flanking attack. He'd qualify as a Lieutenant in D@W:Battles. In theory, that makes him 5th level.


I roamed around seeking old friends. The Company had scattered throughout the larger mob, as cadre for the Captain's will. Some men I hadn't seen since Lords. I did not know if they were still alive.

The Captain himself is serving as a General - he'd be 7th level.


There were three thousand of us now...We had become the brains and nerves of this fleeing shadow of an army.

This was an army of 3000 men, or 25 companies - 24 of which the Black Company has become the de-facto leaders of.  Including Elmo, that's 23 other 5th level characters, plus the Lieutenant, who we'll peg at 6th level.

There's arguments to be had about a hypothetical DM making exceptions, as this control was granted at Lady's (the plot device's) order, but, we'll take it at face value.

As an aside, we're right on the edge of D@W's Epic Scale, where we move to Battalion and Brigade sized battles - there'd be a case for making the Captain 9th level.


Ignoring for a moment the Captain, Lieutenant, Croaker, and the wizards, what I'll go with here is an extremely elite force consisting of 25 5th level, 27 4th level, and 68 3rd level; roughly following demographics for the 4th/3rd level breakdown.

That's a hell of a lot of low/mid level people - by demographics, almost a county's worth of 4th levels. But, the Black Company was a well-storied group, whose members were often able to act as 'independent heroes' in D@W parlance. I think it's warranted. and, honestly, this would be a pointless blog post if it wasn't. Besides, this is the last of the Free Companies of Khatovar, and should be statted out accordingly. They have a reputation.

What does this look like in D@W:Battles, if one were to set this iteration of the Black Company as a single unit?

Let's stat this first one as if they are operating as Heavy Infantry C - sword, shield, and chainmail.

Assuming I haven't mussed up D@W:B's detailed unit conversion rules, we get:

A quick conversion over to the Black Company as a cavalry unit gets us quite the upgrade. Croaker speaks of leaving their animals behind as they leave Beryl, so we can pretend they were a mounted troop at the time:

They pack a punch, either way. A charge by the Company has a good chance of routing most units.

Beryl, the queen of the jewel cities, is most certainly a metropolis - let's see if we can add in the ancillary costs of the Company to see how far we get into a metropolis' garrison cost range.

I make wild-ass guesses as to the levels of the wizards and Croaker. I'd assume after a hundred years or so even wizards as lazy as One Eye, Tom Tom and Goblin would hit 5th level. I'm pretty sure I'm lowballing the wizards, here, actually, but for purposes of this post we're fine. The wizards make more than a few magic items during the story, so 5th may be a minimum. 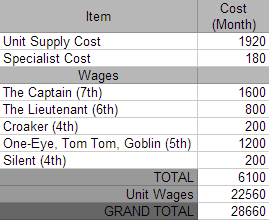 So, 28,660 gold in total to hire the Black Company as your personal unit of bodyguards.

If Beryl has a population of 28,660 families or lower, which is well into the metropolis range from pg237 of ACKS, then the Syndic chose wisely - he concentrated the main part of this force in a form that mainly protected him, and by the rules gained a +1 to Beryl's morale roll - he's spending an extra gold per family on his garrison.


We know that this failed miserably, but, hey.


So there's one of the ways to figure out the makeup of the Black Company using ACKS and Domains At War. It would certainly be valid to lower the levels of the mass of the Company members, say to the 2nd or 3rd level range, but you'd lose the tie-in to the morale bonus from the extra garrison cost. It's not clear the Syndic was really shooting for that from the read of the book, anyway - the actual garrison of Beryl was a bit truculent, and he would have probably been better off with a much larger, less experienced force.

That being said, the Black Company at that level doesn't necessarily not jive with ACKS demographics - on a large enough scale, anything is possible. You're looking at a population drawn from a group the size of a large county or duchy (pg235 ACKS) for a group of men that have been together for years, and whose reputation precedes them across a continent.


It'd be an entertaining way to run a campaign, though - a hundred or so decently competent PCs to choose from for any given adventure, with the occasional pitched battle.

To close, if you wanted to model the Black Company as merely a group of veteran cataphract cavalry, using the same cost numbers, it'd be 3.93 units, which we'd round to 4 (we'd only need 4 men to do so). That's 240 men, or two companies of infantry - still within a reasonable number for fitting on an oared ship in a fantasy world.


If you haven't noticed, and judging by attendance you haven't, over on the right has appeared a static page for templates for use in Roll20 to set up Domains At War:Battles Strategic Situations.

Instructions for use and a downloadable ZIP of all of them are on that page. Previous downloaders should note I've made some improvements, notably adding notes on where Vanguard and Rear Guard units should appear. 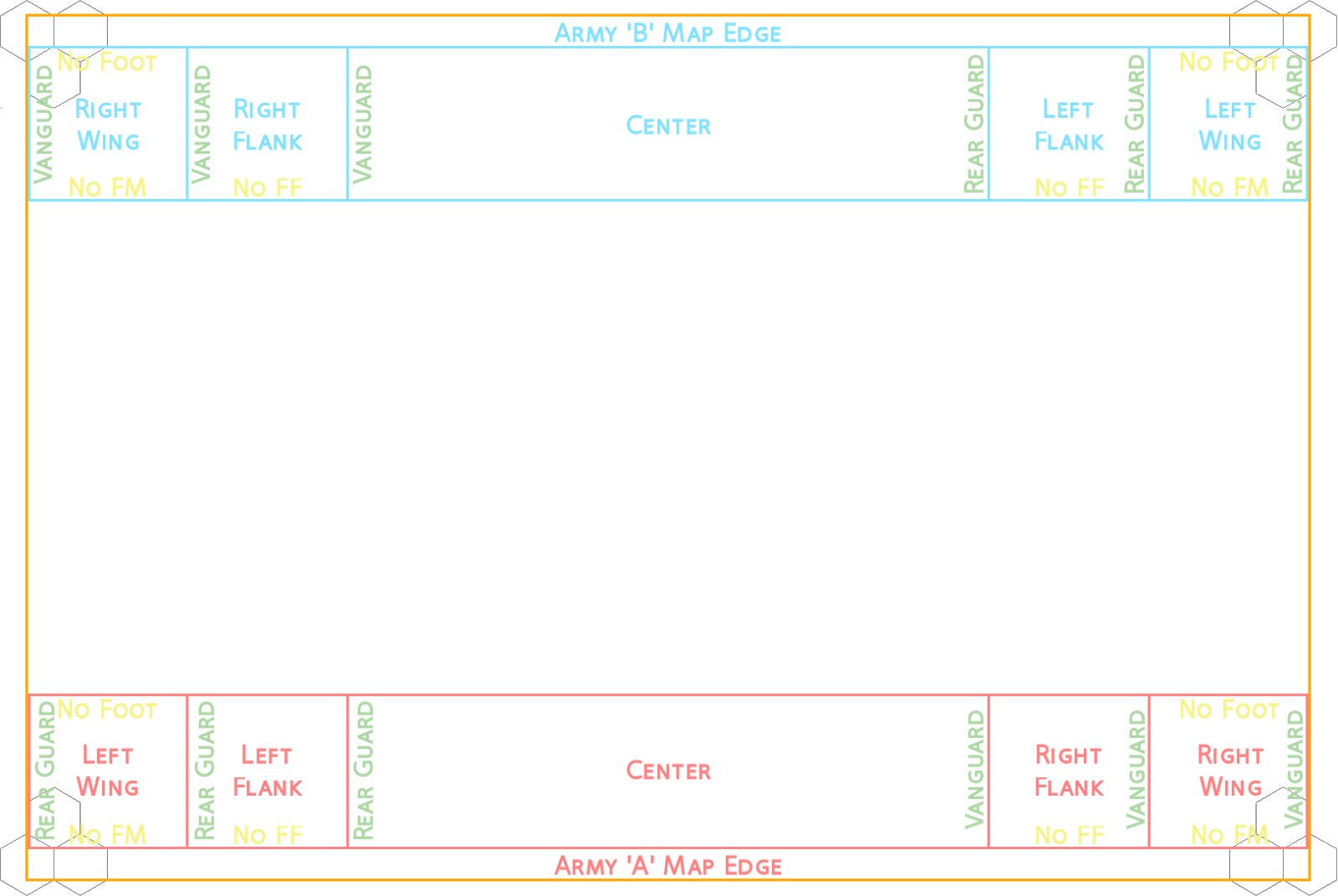 They are, hopefully, sparse without being confusing.