The Strategic Review and 1E Ranger (I don't recall a Basic DND Ranger?) would gain spellcasting in later levels as both a Cleric and a Magic User (Druid and M-U in 1E), something that's not easy to model with the ACKS Player's Companion.

For the price of a single build point, a class may split its casting ability between Divine and Arcane. This single point grants the class the ability to cast as a Mage and Cleric of 1/4 its level, rounded up [ceiling()] for Divine and rounded down [floor()] for Arcane.

The class may Turn Undead as a Cleric of 1/4 its level. 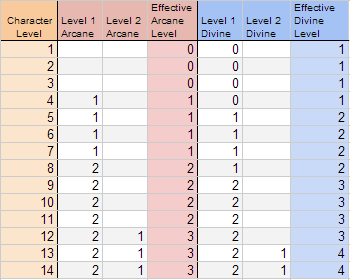 A class may delay availability of its spellcasting. The class may alternate gaining spellcasting levels (first Divine, then Arcane) starting at Level 8 with Divine casting, as in the table below. 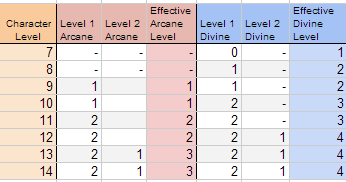 This is intended to even out and spread out the spells available to the Arcane and Divine sides, as in the Strategic Review Ranger. The fact that ACKS uses the B/X concept of Cleric not receiving spells until 2nd level causes us to grant one non-casting level of Cleric before we start the alternation.

Whether or not the class can cast Arcane spells in armor is a matter left to GM preference.

The class's Divine repertoire is based on 3 Divine spells per level.


ALTERNATIVE 1: A class may choose only one of Arcane or Divine to advance as a 1/4 level caster. If so, allow the class 1.5 proficiency slots to be filled by the class designer as normal. The class may trade in Turn Undead (if the Divine half value is kept) for another half a proficiency point.

ALTERNATIVE 2: A class may delay spellcasting in the regular manner, by gaining a level of each class starting at 11th as in the table below.

The class gains another Arcane spell level here in trade for the long, long wait.

ALTERNATIVE 3: The GM may opt to match the Divine progression to the Arcane by bumping the effective Divine level by 1 at levels 4, 8 and 12, as in the table below. 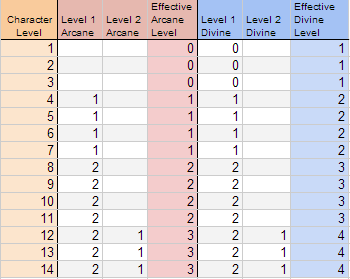