So, after mentioning it last post, I googled around a bit and found a .BAS and a .EXE for the Heathkit Dungeon!

Super exciting! A quick apt-get of dosemu later, and it's on! It's exactly what I remember. One of my late BASIC projects as a kid was giving this thing real graphics - I had a sprite for almost every monster. It was pretty cool - I may still have it on some old 5 1/4" disk somewhere, but, probably no working drive.

As if a gift from the past, the random number generator gave me this as one of my starting locations: 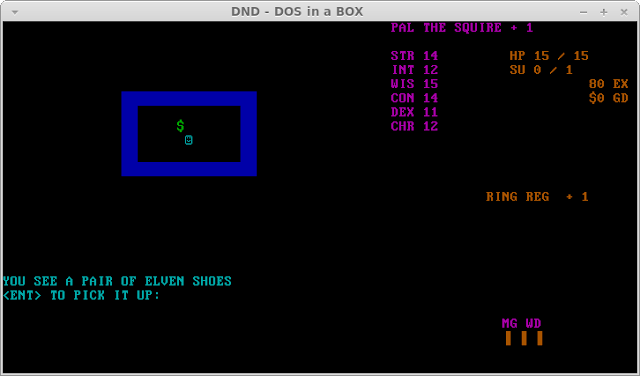 
Look at that! Random dungeon generated with no way to go, only the stairs up - to a tavern where you turn in your gold for XP.

Making the best of it, I sat there, picking up items and fighting monsters (if you stay put, a random encounter may happen, despite the lack of entrances to my area) until a Level 1 Vampire drained me to Level 0. Interestingly, that's survivable, but it took 4 max hit points away - and, also, 4 current hit points - I was at 2 HP at the time so that killed me.

Note I'm a Squire - there's no classes - your moniker is taken from whatever your best stats are. Everybody can fight and cast spells. There's also a limited amount of magic items, monsters, and spells, but they're all staples - note the Elven Shoes I'm about to pick up there - they help you not fall into randomly encountered pits, and aid you in hitting a monster when it first appears (initiative, basically).

Funnily enough, it was "real time" - there was a timer built in, that if  you did nothing, the choice would disappear, and the round would restart - another random encounter may happen, or the combat round would continue with you having done no action.

It's good, good stuff from back in the day. If you've read Playing At The World, that right there is a direct descendant of what the author was talking about when he was relating how sysadmins around the globe would be stomping out these wastes of precious CPU time.

For the curious, it's here. Source code (Old school BASIC - this thing is nothing but GOTOs and GOSUBS). That site also has a lot/all of the old SSI AD&D games - from the original Pool of Radiance to the last Eye of the Beholder.