As it turns out, I've got many, many unpublished posts lying around inside the blog. As might be surmised, things around the house and work have changed a bit (none for the worse) and I just don't have the time to dedicate to this - the ideas, I have plenty, to format them in a even vaguely shareable format, not so much. And I'm not one for random rants.

In the real world I've joined a 5E campaign for a time, which is literally my first time playing the edition, so it's a little weird coming into it after essentially being 'ruined' by ACKS, as far as just pick-up-and-play - I already have several spreadsheets dedicated to picking things in 5E apart....

Anyway, I found this, written in 2016, it looks like a mostly complete thought, and I'd been reminded of this particular product again while studying 5th Edition. I think there *might* be a good solid game in 5E, but I'm not sure anybody would recognize it once I thought I was done mutiliating its corpse.

And, there's some tertiary nostalgia in here given the release a while back of the Modiphus Conan, whose entire business seems hyperfocused on getting licenses to really interesting fictional worlds and then half-assing in some weird quasi-storygame-fatelike system...


I've been thumbing through the Del Rey 3-volume Conan collection again, and that always gets me
thinking about a game that 'got away' - Mongoose's d20 Conan RPG. 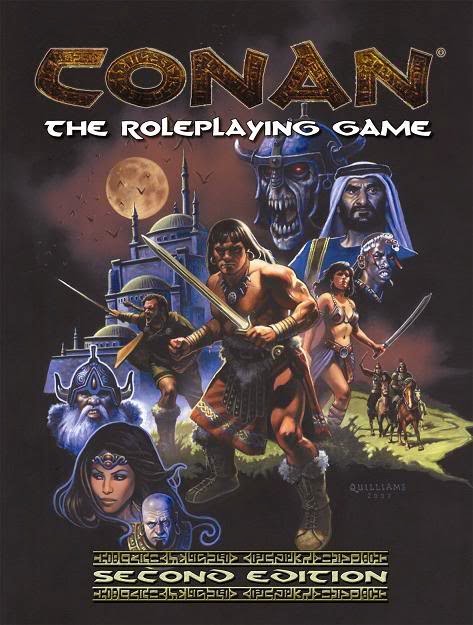 Somewhat panned upon release, mainly due to Mongoose's spotty editing, it is nevertheless one of the more unique twists on the base d20 created, and, to me at least, seems like a product that had a lot of love put into it - love of the source material, and the game that could be created out of it.

The game is, sadly, both out of print and not for sale - Mongoose's license with the Howard estate (or whomever) expired and was not renewed.

While a full review of something that's out of print isn't necessarily in the cards here, I've long loved the idea of putting some of this in play.

And I just feel like evangelizing and/or eulogizing something that I never really got to use.


The authors clearly had a great respect and love for the source material - they did dip into the various pastiches, but had a rule of "Howard First", where anything from a secondary source would be trumped by Howard's writing.

In fact, Chapter 10 of the core book is from Howard, his 'Hyborian Age' manuscript, in which he laid out the history of his world, from before the cataclysm to the dusk of the Hyborian Age, when the sea and mantle swelled up and split Europe, Africa, and Asia into the land forms we know today.


I haven't seen every d20 product by a long shot. But of the ones I've glanced through, the Conan RPG exults in the system, rolling around in it luxuriously, like Demi Moore in Robert Redford's money.  It takes no prisoners in the arena of combat complexity; gives no care to the strictures of Vancian magic. If there's an awesome thing done in the library of Conan's adventures, you're damn well certain it will be in these books.


It's unapologetic. It's turned things up to 11, reading it makes you want to be that class.

Here, let's go through the classes in the 2nd edition core book, you can see what I mean. I'm skipping over a lot just to point out the over-the-top stuff.

Warning: d20-like language ahead, if you don't recall AOOs and move actions and all that jazz, you may be a little lost.

Barbarian: Versatility: Take a -2 with any unfamiliar weapon, be it exotic, improvised, or even a weapon which can't be thrown. By 14th level, not only do you not have a penalty, you've increased your critical threat range with any object you can conceivably hit another creature with.

Barbarian: Bite Sword: Carry any light weapon or one handed slashing weapon in your mouth for 3+STR rounds (3+STR minutes if a light weapon).

Bite Sword, right? How many times does that happen in the fiction? So there's a rule for it. That's  what I'm talking about.

Borderer: Heroic Sacrifice: When you reach -10 HP, you do not die - as long as you end the round adjacent to an opponent, you may continue to either move or attack each round. You could be killed by poison or sorcery, but not damage.

Noble: Do You Know Who I Am?: Declare yourself and your heritage as a full round action. Opponents must make a Will save versus your CHA and Reputation and level or not be able to physically or verbally attack you.

Come on now! First off, we've just implied verbal attacks; there is a way by which you can harm folk's social standing and reputation. Secondly, raise your hands if you've ever tried that.

Pirate: To Sail a Road of Blood and Slaughter: Coup-de-grace as a free action, take no AOO, gain a +4 to Intimidate for the next round.

Even the names are evocative.

Scholar: This is the magic using class; there's nothing awesome by itself in here, but we'll talk about magic later.

Temptress: Outrageous Flattery: From 9th level and above, the temptress has faked sincerity countless times. When she says that a person has a lovely physique or an impressive stance, her statements sound completely plausible, regardless of how hackneyed her words may be.

Look! They've made a power out of the southern phrase/concept 'Bless your heart'.

Thief: I judged d20 product by whether or not they dropped the 'rogue' moniker in preference to 'thief'. It's the rogue on crack - bigger sneak attacks, more powers earlier, etc.

Everybody gets something every level. You get 5 bonuses to a single ability, and a bonus to every ability 4 times - if you survive to level 3 or 4, you're quickly ramped up into badass levels in pretty much every class.

I think that a lot of this boosting of all the classes - especially the combat classes - is due to the freedom imparted by the change in the magic system. The acknowledgment and acceptance that using magic in Howard's world is not utilitarian, not safe - it's dangerous and it will break you - lets all those old arguments about linear fighters and quadratic wizards and the 1-hour adventuring day fall by the wayside, and they can go full-on cinematic nuts with the FX on the men and women with the swords.

You're not relying on your magical swords and rings and such to get you through the day, so, here's some shenanigans you can pull off.

In return, though, the Massive Damage Threshold (save or die after taking some number of damage all at once) is only 20 points - which is easy to do. Add to that you stop getting hit die after 10th level (in ACKS, this would be 7th level, rather than 9th, since Conan is a 20-level system)

Players gain reputation via deeds - there's guidance on how much rep you'd get for an adventure, based on how public it is. Your reputation is modified by your social status, your level, and where your deeds were peformed - do great deeds in Zingara and they'll barely recognize you in Vendhya.

It wears off over time, as well, as great deeds fade in memory. Reputations are tagged; so there may be situations in which your "+5 reputation from betraying a prince" may go against you.

In addition, you can generate yourself an Alias; and thus have two differing reputations.

This is really asking to be tied into ACKS' Demographics of Heroism. 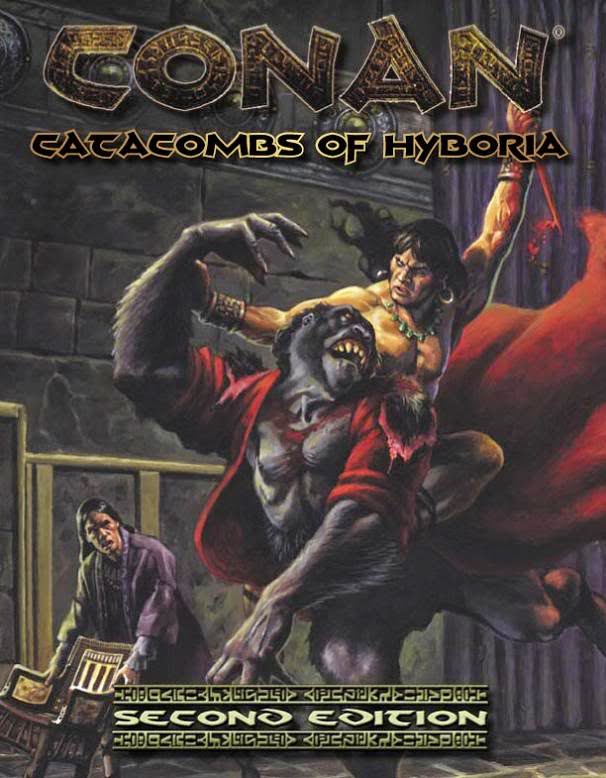 There's some real red meat in this section.

Carouser: No penalties for drunkenness, gain bonuses to social skills while carousing, wake up the next morning as if you had a full night's rest.

Opportunistic Sacrifice: A coup-de-grace counts as a ritual sacrifice for the purposes of gaining power points (for casting)

Priest: You are an ordained priest, with the social benefits that brings. Which is exactly how all clerics should be handled.

EVERY WEEK , ALL CHARACTERS WILL SPEND A MINIMUM OF  50% OF THEIR CURRENT WEALTH ON HIGH LIVING, IF THAT WEALTH IS CURRENTLY OVER 50 SILVER PIECES.

It's in caps like that in the book. It's the ultimate carousing rule.

The most notable thing is that defenses are broken out into Dodge Defense (DEX) and Parry Defense (STR) - armor is damage reduction - all in an attempt to get that feel of cinematic combat, where barely clothed barbarians duck and weave around befanged monsters.

I have no idea how that worked out in play.

There were also a number of combat moves with cool names - Pantherish Twist, Shield Slam, Decapitating Slash - most of which keyed off the overly complex AOO rules and the Dodge/Parry change mentioned above. 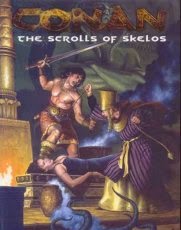 Hyborian sorcery is a long, slow, dangerous process. You won't be popping off fireballs after a good night's sleep.

Sorcery is fueled by Power Points, regained via rest, or sacrifice of living beings, or rituals where a group bands together to funnel their power centrally.

The Rule of Success: When a spell is successful, it can be immediately cast again at half price. If you slay someone with your spell or by weapon, you get a morale bonus to physical and magical attacks on the next round.

The Rule of Impermanence: If you die, all of your magical items crumble to dust, or spells stop functioning. If you're KO'd, your things get a saving throw to avoid.

The Rule of Defense: Blow all  your Power Points for a last-stand defensive blast against an attack.

The Rule of Obsession: If your character becomes Obsessed with something besides sorcery - an allegiance,  another person, multiclassing - lose total Power Points. If you overcome it (break the allegiance to your benefit, kill the person, etc.) gain those points back plus more.

The Rule of the Master: If you learn sorcery from another source, you have a master. The master can remove/grant Power Points, perform rituals for the master.

The Rule of the Sorcerer's Soul: Other sorcerers and extraplanar entities can see you are a sorcerer, and how corrupted you may be and how many power points you hold (in general terms on both), just by making eye contact.

In addition, there are consequences. You become corrupted over time, gaining mental and physical deformities.

Some spells are "mighty", and casting them too often may break local reality, harming or killing you.

It's ridiculously flavorful, and could possibly be used as guidance on bringing any fictional style of magic into a game, from Tolkien to Abercrombie.

The World of Conan

Over the course of the few years it was in print, Mongoose put out a lot of product about the world - I'm relatively sure they touched on all of Howard's nations.

A Judge could put on a pretty good show of running Hyboria with all of it.

One of the reasons I thought of this was this post at Black Gate talking about The Known World - also put together in this format, as a homage to Howard's idea to simplify (for better or worse, honestly, views expressed in the Conan fiction were a product of it's time) various cultures into touchstones that any reader somewhat knowledgeable of our own world would be able to hold on to.

Anyway. If you see it around for a price that falls under your 'impulse buy' threshold, don't hesitate to pick it up - especially if you're a fan of the Conan world. It's a good read, it's an interesting take on d20, and it's just chock full of flavor.