Forgot I had a blog there for a bit. Useless Summer Season continued a touch longer than expected, and the demands of employment have been a bit exhausting.

Some of that previous free time has gone into running a game, so it's been for a decent cause. We're in southern Poland, 1408; a bit outside the ruins of Krakow (cause it turns out the Wawel Dragon was real, not previously slain, and woke up cranky). They've hijacked a failed settlement (recast Orlane from N1) and have been gallivanting around getting in trouble.

4th level now, having started at 2nd; and there's a bit of a henchman train forming. So that's good!

The hex mapping project is going along fine. I don't have an image prepared, but I've got

which is a decent start.

I'm working right now on establishing the Terrain Ruggedness of each .375 mile hex, which is an embarrassingly parallel computation that was started embarrassingly not-parallel, and it's taking a while....like weeks, and I'm not invested enough in the output to stop it and do it right. I don't want to take this nice map I'm making and just throw up bands of hill and mountain icons - I want to mark hard-to-pass hexes on a data-driven basis.

I also need to loop back to vegetation and land use.

I'm fighting the boundaries of the computational power I have available to me inside my house. I'm really at the point where I could stand to port some of this up into a cloud service, but I'm so cripplingly parsimonious.

I've branched into 3D balsa-craft, of a sort (longtime readers may recall I make flat wooden tokens for opponents on the battlemat). I decided that, as I've dropped a hint for Sakkara, I'd eventually want a dragon, and I wanted it to be special, so: 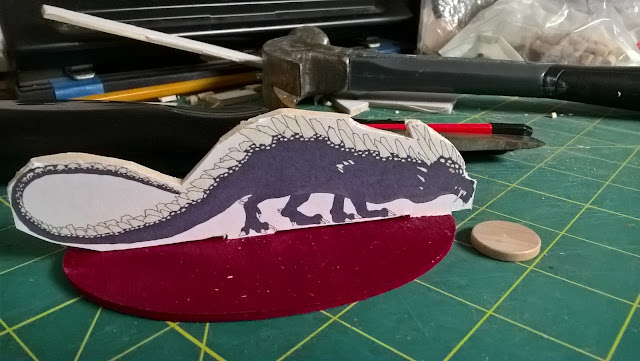 On the "Huge, Long" sized base I use, colored whatever that is as dragons are Fantastic Creatures. That's a 3/4 inch base to the left; the squares are an inch on the cutting board.

He's balsa wood, and two-sided, this is all I've cut out. Two 'feet' extend into the base at the front and then the backmost leg, hacked out with a chisel.

I drew that guy based on a couple online images, and spent way too much time doing shading and coloring and scales...and the action of downsizing it and my friggin printer hid all of it.

Blah. I hope it is suitably impressive for the players if they ever meet it.

And I did a mock-up of a hydra, just in case: 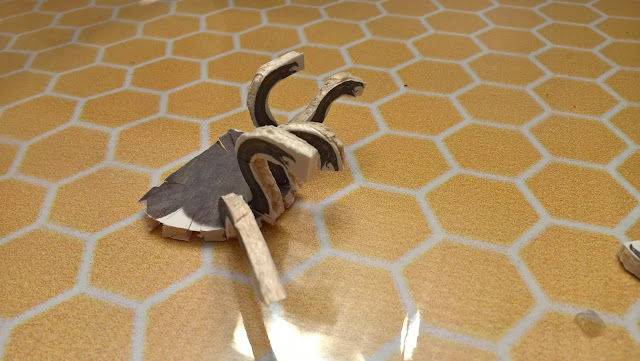 This is all balsa right now; and I need to do the "head base" in wood, because it's just not working balsa-to-balsa. There's a base that's the same size as the dragon's above with the "body" of the hydra pasted onto it, but I didn't have that with me at the time.

I'm mostly proud of this because the heads are removable - I'll have 12 heads, 12 slots, and I can set it up and take them down as the players attempt to defeat it. Or grow them back if warranted. 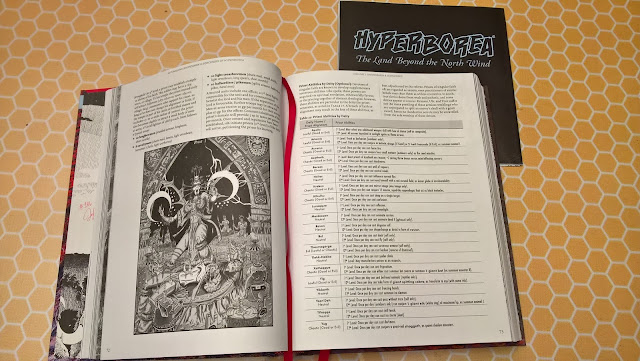 Number #186 from Jeffery Talanian's AS&SH. The ribbon is either randomly and auspiciously within the cleric class or everybody got it that way.

I've been a fan of it for some time; and took the opportunity with 2E to get myself something nice. It drew me in with the art (1E's pencil-shaded art is glor-i-ous, and much is repeated in 2E) and the writing style - the eclectic language choices really help set a mood.

AS&SH gives me the same mental ambiance as reading 1E - a sort of anachronistic bad-assedness tied in with little arcane corners of rules, with the bonus of being wrapped up in a setting that's extremely-D&D but can be taken absolutely seriously.

Dunno when I'll be back, but that's what I've been up to. Once some of these computations wrap up, I'll at least have a map or two to show off.