On the Move: Adventures & Splats


More archeology from the deep recesses of my abandoned bookshelves:

I had ran a campaign in the mid-late 3E days; which worked out pretty well. It kinda fell apart after one of the players went back to Germany - he was the soul of the group, really.

Dug up from those damn shelves again: 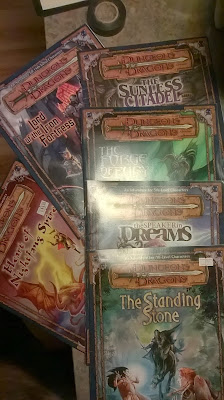 This is most(?) of the original 3E line of adventures, which I sprinkled in amongst things.

I started out with the Sunless Citadel. I replaced the map, and I played up the vampire in the tree a bit more to good effect - I made the tree a lot bigger, for one, and it was able to shake it's silvery leaves to hypnotize.

The twig things would drag people into nodules on the root system, much like the knees of a cypress tree, to be drained.

The Standing Stone was used much as-is, I believe we'd had essentially a party of Chaotic adventurers having some plan to turn animals into people in order to infiltrate places..or something. It was a weak plan I'm sure.

The upshot of that run was a corrupted druid - my wife played a druid at the time, and we had a long conversation between that NPC and my wife, who evidently decided the NPC was a wayward comrade who needed a good stern talking to.

To this day, the other players are not sure if that was just roleplaying or if there was some sort of subtextual marital argument going on.

The Speaker In Dreams was close to as-is? There was a cult, they were working on summoning things. I didn't end up using the other three in any capacity.

There was supposed to be a dragon at some point; and there was a powerful witch the party was following/pissing off.

I had a habit during this time of having the main cleric of any given settlement either in on the deal or already dead. Became a bit of a running gag.

Near the end of that campaign the party had followed the witch to Freeport, her base of operations. 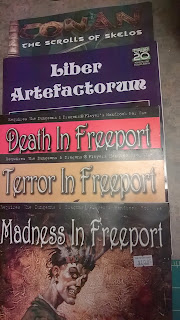 I have the "green" Freeport module as well, but it got caught up in a box already, and I can't figure out the title for the life of me.

We'd gotten partially around in the city before the campaign folded. I'm still keeping the basic ideas from that adventure in my back pocket, I've got a location in mind for the whole "lighthouse" plan.

Green Ronin got a lot of mileage out of Freeport - it's still going today in several versions.

I have no idea why I have that Liber Artefactorum.

The Conan book is part of my past and current fascination with that system despite never having been able to run it.

Mongoose made a lot of splatbooks and other content for that game.

I should reign in that allegory, it's getting a bit...ah, whatever. I should stay marginally PG rated. 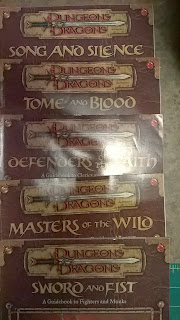 The originals, quickly orphaned by 3.5 and the "Complete" series of hardbacks.

Tome And Blood first gave us the Alienist, which I had a lot of fun playing for a couple years.

The "True Strike" power given to pseudonatural summoned creatures was a good time. I used Dire Weasels, who, on a successful hit, would latch on and start draining blood.

True Strike gave you a one-time +20 to hit...so, the weasels would essentially auto-latch as their first attack. 3E was so dumb sometimes. 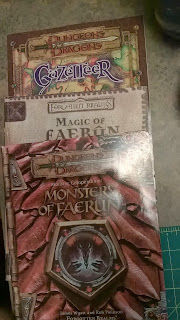 I'm guessing at some point I wanted some monsters and magic - I had no other interest in Forgotten Realms.

Dunno why I have the Gazetteer, I never ran in Greyhawk, and the last time I would have played in Greyhawk would have been highschool, and 2E, probably. 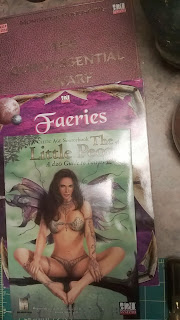 Some 3rd party splats. I think I had more of these, I expect they've spread around and been lost when the college group got married and had kids.

The dwarf book is someone else's. I borrowed it because it had mining rules and the party had been gifted some resources.

The Faerie books were purchased to fill out a campaign idea I was having.

That one on the bottom there has one of those covers folks spend a lot of time talking about these days.

That particular publisher had a...fetish?... for using pinups from Lorenzo Sperlonga on their covers.

She's surprisingly more modestly dressed on this cover than on the original piece.


I honestly can't say I got as much out of any of these as I'd paid for. That market was the market at the time, and I responded as a consumer, as many other people did.

Heck of a time.

On The Move: Silmarillion

Well, all the stuff is moved. Still to do is put it all away, and rebuild my office. But before that, the old house has to be spruced up and sold.

And find some screws for my TV's base - turns out I won't be hanging it on the wall again in the new house. Evidently where the best place to put it is there's a lot of plumbing in the wall.

I am not putting a quarter inch bolt through a stack pipe my first week in a new house. :)


From the dark recesses of my old basement's built-in shelving (oh, how I'll miss them...): 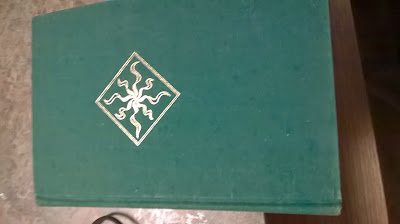 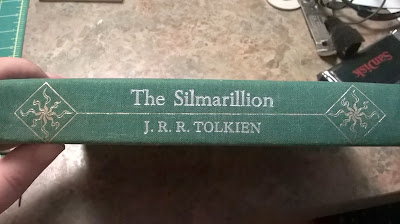 Without dustcover, evidently. This is the first American printing, 1977.

It has a fold-out map of Beleriand in the back: 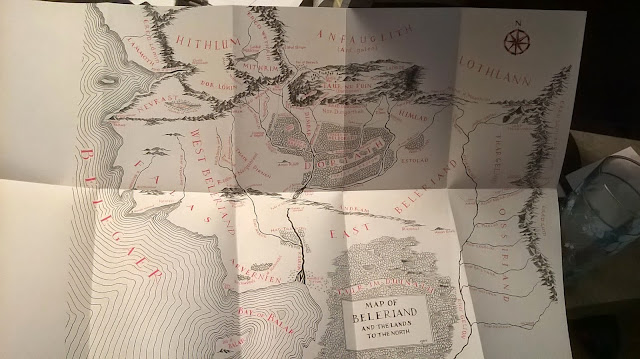 How many campaigns' mythologies found inspiration from a reading of this book?