On the Move: More Tokens


We have, somewhat unexpectedly, decided to move.

This wasn't 'bad unexpected', there was some conversation, some possibilities talked about, and we started looking around to see what was going on.

As these things go, we found what's very close to the perfect house.

So, we bought it, despite being completely unprepared to do so, and without having our current home ready for sale. It's all rather less organized and thought-out than I'm accustomed to.

We're moving within the six mile hex, so our only guaranteed encounter is with a Mortgage (30*** HD)

Real life once again intrudes into the worlds of heroes and horrors - you, however, will enjoy a series of throw-away posts while we get all this shit packed, moved, unpacked, then a extraneous house cleaned, fixed, sold. And there's a ~2 week summer vacation buried in there too!

First up, I found the rest of those tokens I'd talked about back when. 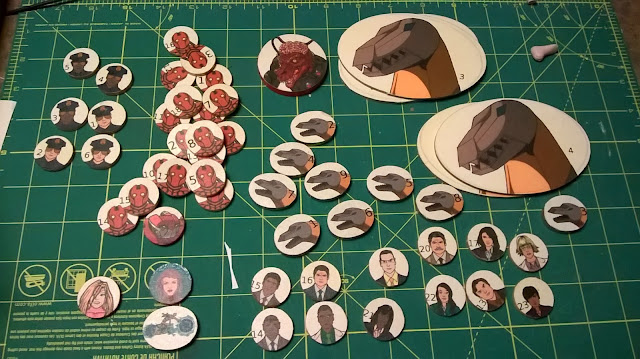 These were from a Mutants & Masterminds 3E game with the children. Top center, a bad guy (can't recall the name) - a hyperintelligent dinosaur from the distant past bent on restoring the world he knows.

Also pictured - the group of orange-suited guys mid-left - their leader on the bottom. That's some sort of Black Manta analogue, with henchmen. Helpful police on the far left, innocent (perhaps...) bystanders on the bottom right (including two white-coated scientists, whose fault something will surely be). Pretty sure #20 is a detective, as evidenced by the trench coat and mustache.

Bottom left, two PCs - blonde and pink is my eldest daughter, a sort of Starfire-esque strong flying beam-shooter. Next to her with the motorcycle is my wife, who is much like a Ghost Rider if Cyndi Lauper was Ghost Rider, without the skull motif.

...far upper right is an Elsa foot. A bit of epoxy and a brad stuck halfway up her calf got that back on.

I really like M&M 3E, despite a few flaws. I personally houseruled Toughness a bit into more of a condition track system with degree-of-hit tracking...I think I posted that earlier? It was fun. I'd like to go back to it and take the simplification-scythe to it again, and see what happens.

The Sinister Stone of Sakkara: Funded!


The Sinister Stone of Sakkara funded, and did pretty well:

Compare that to the original ACKS KS, ending at $11,648 and 246 backers. Autarch's first adventure gathered more folks than the original ruleset - they're doing good work, and by that have built a core base of support.


It made it through to the second bonus goal - a landscape painting of two sites in the adventure.

I think that's a great idea. We're always getting 'action shots' of PCs doing things, etc; - what we don't get a lot of is the "feel" of a place from a well-rendered overhead shot.


Think back to the last time you caught a part of a cop/lawyer show - always breakaways showing some mess of skyscrapers. Hell, Game of Thrones' opening sequence, for that matter.


Landscapes are certainly something I could stand seeing more of.


The third bonus goal, a primer on the Auran Empire, was also hit, which is going to make a lot of people happy - there seems to be a lot of unmet demand for more Auran Empire.


That's good. I like to see more ideas for settings, and the Auran Empire seems to be compatible with me. Also, the supporting mechanics that Autarch puts into it's products are always a joy.


I've seen some of the roadmap for Autarch, and I think everyone's going to be pleasantly surprised. As much as Dwimmermount ended up providing a how-to-megadungeon, I think the Auran Empire Campaign products will join the ranks of the best how-to-sandbox-campaign guides currently available.

And you'll get a fully functioning campaign setting, to boot.

The Sinister Stone of Sakkara is merely the first step in that - just wait till you see what happens when Autarch zooms out from that in their next Auran product.