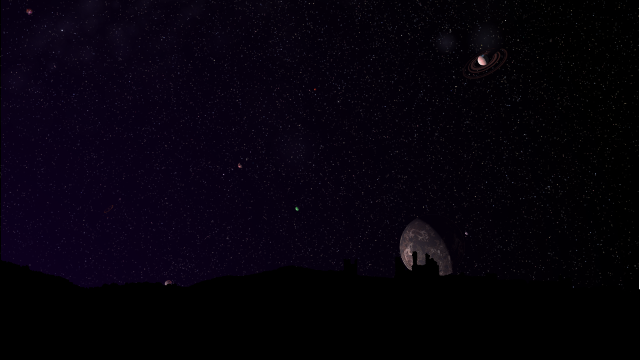 A perilous dusk, as all worlds visible with the naked eye have risen.

See you then, the stars? Know that they see you as well, apprentice.

This is the gift of Sol; a daylight that washes away the eyes of the other worlds, infinite in number and malice. Sol's Light is Life and Law, it is Order from Chaos, it is Clarity and Vision. These are the tenets by which we guide mankind.

This is a fell night, as all the common worlds have risen. 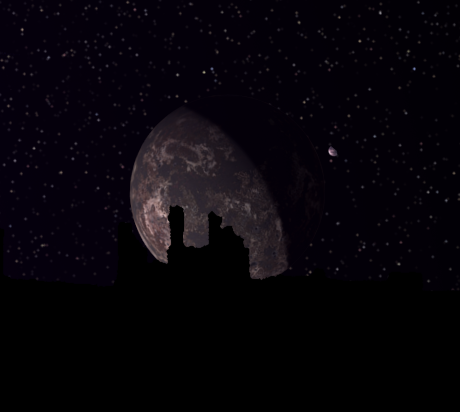 First, then, the closest, Lune; the Moon, rising over that far ruin. The first of the worlds that revolve around our own, Lune is cold, so cold its very air lies as snow upon the ground until the light of Sol evaporates it for a time. It is all crags and low, rough mountains, pocked with craters. The dark seas are a gritty soil that sprout dusky fungal fruits during the day, when the air is up, harvested by the masters of that world. It is said it is the remnants from the creation of this world, the potter's leavings left underfoot, as it were. Why else would it be between us and Sol?

It is, for all it's apparent dryness, water-aspected, and moves with the tides. It has some aspect with the blood and humours, as diseases like lycanthropy show. Underneath the surface, past miles of labyrinthine tunnels, a starless ocean lies unseen. Sages posit the native forms of that world swim through those dark waters, though opinion is divided on whether they would be ignorant of what lies beyond their seas.

That world's surface masters are the Formians, insectile creatures of many forms - each form it's own function. The fungal gatherers scuttle on 4 legs, four more arms scooping their harvest into a sort of saddlebag as fast as they can, for the harvest time is short. The calfherders air out the mooncalves during this time, long of limb, with amazing jumping ability. Those are the only two types seen on the surface, the rest live and labor underground.

At certain times during the orbit of Lune, when it, in its hubris, eclipses Sol, the Formians are able to sail the Ninth Form of light to our surface, where they collect what they need. Their world is poor in real metals, and some of their alien industry requires what can only be found here. They sail back again when Earth eclipses Sol from Lune.

So, then, 3 more configurations of Formian are known: the mantis-like miner, who has a sort of metal sense, and vicious appendages for digging, and the sailor, a spidery sort of moth whose web-workings can catch the Ninth Light. The third is the warrior, or at least the warrior form for our planet, a sort of standing centipede with multiple limbs, which also collects the ore from the miner.

There is no doubt a multitude of forms we cannot see under the surface of Lune. If they resemble our insects in any other way, there must be other sorts of drones, and queens to spread the species. It is known they are not native to Lune, and are refugees from some further, stranger world.

Formian miners look much like mantis, but with more hulking shoulders, and strong arms ending in sharp-tipped claws, made for digging. They are usually encountered with warriors, below. They can sense metals within 240', and on rare occasions may lead their expedition into a group of well-heeled dungeon adventurers.

Due to their limited time on Earth, a cottage industry of migrant miners lead by an experienced scholar may pick up a mine where Formians have left off, stripping as much as they can before the next eclipse.

Formian warriors are fast and dangerous, having a long centipede-like body with 12 long legs on either side. Four of these twelve legs can be used at any given time for combat, either attacking with their claws or weapons. They have sensory organs on both ends of their bodies.

When not used for guard duty, warriors carry ore from the miners to the sailor's location for packing, with a chitin-sided box strapped to their middle segments. Warriors have a habit of inscribing strange runes in stone they pass, for purposes unknown.

Formian sailors are large, mothlike creatures, with the long legs and fat abdomens of spiders. They spend their time on the planet wrapping ore into bags they weave from their webbing, as well as the sails they will use to ride the Ninth Light back to Lune. They do not venture underground; they spend their time at the evacuation site working ore and sails.

To pack ore, sailors will first work the ore under their mouths, using their acidic saliva to dissolve most of the dirt and soft stone from the metals. They then begin to stack the ore neatly, wrapping it in webbing as they stack.

The sailor is able to shoot a stream of webbing at an attacker within 30'. The webbing is undimensional, and the touch of it is extremely painful, causing burns and abrasions. The opponent will suffer a -2 to attack throws for a day, unless a cure light wounds spell is used.

The launch of the sailors is a wondrous thing to behold; their sails and wings bursting into iridescent, inexplicable colors as they catch the Ninth Light, lifting up into the sky at increasingly impossible speeds.

Mooncalves are huge cephalopods, with 6 10' tentacles clustered around a beaked mouth, and 2 30' additional tentacles with sharp fronds at the end. They fly on membranous wings looking much like the ears of an elephant; and do not land.

On occassion, mooncalves break free from their herders, wandering the moon's surface. They are not very intelligent; rising perhaps to the level of curious infants. The light of the Earth tends to attract their attention, and they fly across the aether to investigate. They tend to stay around the mountains, avoiding the deeper atmosphere.

If a tentacle attack is successful, the mooncalf will begin to constrict it's target, dealing 1d3 damage each round, and giving the victim a -1 penalty to attack. Each additional attached tentacle adds it's own damage and penalty to the victim. Dealing 6 or more points to a tentacle in one attack will cut off the tentacle. The fronds, usually used for gathering lunar fungus, can be used to attack up to 30' away.

A sufficiently bright or novel source of light can be used to lure the mooncalf elsewhere.

Formians! The inexplicably blah replacement for Modrons in 3E that simultaneously make me sad about the Starship Troopers movie. However, thanks to Herbert George Wells,  we can throw them in a blender with a little "The First Men In The Moon" and get back a nutritious shake of Swords & Planets.