The pseudo-fortnightly production on this blog nearly ground to a halt; fortunately for you, dear reader, Kerbal Space Program will not work on my office computer, thus keeping my lunch hours free to cogitate on DND.

I love launching those little green idjits into space. I've gotten readings from orbit around both Mun and Minmus, and I'm working on getting some permanent probes up. It's odd that the tech tree allows me to send up men before machines; but I suppose the NASA program was also pretty close to simultaneous man/machine launches, though that was due to geopolitics more than anything.

In a more bloggish note, my post on Ovatic Spellcasting is a spam magnet - on the plus side, I've gathered several entertaining NPC names:
Dr. Agbalagba actually posted twice; first time without the 'Doctor' honorific. I was more impressed with him when he wasn't a doctor; in a world of Priest-Doctors and World Greatest Lords a sorcerer without a title must be powerful indeed, yes?

I really don't get these though - cheap boner pills and random sex with stranger spam I understand, I mean, who doesn't, right? I had no idea there was a spam industry based on having spells cast to get back stray lovers. Doesn't the random-stranger-sex spam solve the lost-lover spam?

I'm marginally concerned that this post will cause a wizard fight to break out in my spam box.


Way back here I talked about ACKS' proficiency system, and how taking a proficiency essentially gives you a +4 bonus, then a "virtual 18" for an additional +3 in an ability related to that proficiency for purposes of using it.

So, what about allowing ability bonuses to modify more things by default, but they only last for a little while - once the character's class progression outstrips the bonus from the starting value, that bonus is lost.

Rather than it being a flat bonus, it's an overlay - a 1st level fighter with an attack throw of 10+ with a STR of 18 has an attack throw of 7+ - and that sticks until 7th level, when his unmodified attack throw passes his natural ability. A Mage with an 18 DEX will gain a benefit on ranged attacks until 13th level! 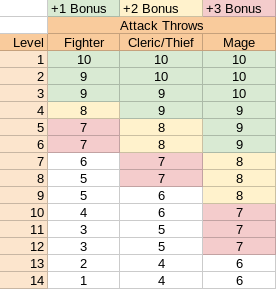 The table here illustrates this - the entries are colored by what that ability bonus is better than or equal to.  A fighter with a 14 DEX, a +1 bonus in ACKS, gets 3 levels of benefit - at 4th level, his skill outstrips his natural ability.

It might be a bit jarring to see it applied to attack throws, but, let's look at a couple things that haven't historically been given ability bonuses.

FWIW, damage bonuses from STR would be applied all the time. Swingin' hard is swingin' hard, if you hit or not.

Saving throws generate a big table - I'm making no presumption as to what ability might correspond to each save, but, you can see that what holds for the attack throws holds here too - Fighters quickly outsrip their abilities, whereas a Mage with high CON might rely on it to help his Poison & Death throws for the majority of his career. 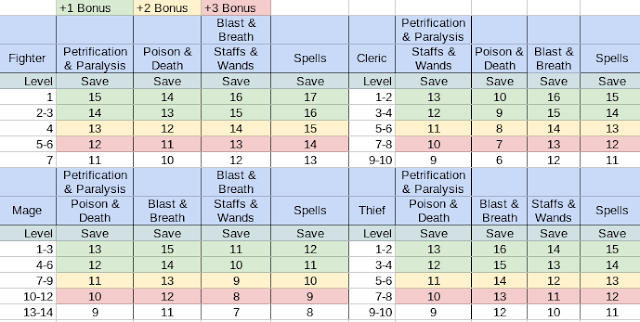 And, for last, the thieving skills. This may be very well the best place to do it; a little boost at low levels on thief skills is something I've heard mentioned a lot around the interwebs.

Our thief might stretch his natural talents all the way to 4th level before training overcomes them.


There's slight precedence for the change in attack throws - the Potion/Girdle of Giant Strength sets your attack throw to that of an 8 HD creature, unless you're already better than that, which, in a roundabout way, somewhat validates my idea. Gauntlets of Ogre Power take a small hit, though, in that they set your STR to 18 - you'll get the extra damage but not the attack throw bonus if you're a Fighter of 7th level or higher.

All in all, still old-school, in that high ability scores aren't necessary - they just may ease out some of the low levels. It's also a bit new-school, in that you can apply ability score bonuses to more things ...without fearing the PCs being monstrosities at high levels.