So there's a September 30-day challenge, let's see how fast I fail!


I've posted on this one before, so I won't go into too much. 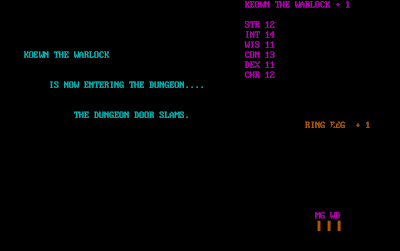 This was it, on a Heathkit Z100 sometime around when I was perhaps 8 or so.

I started off with a Ring of Regeneration +1 just now, that's not bad. In my haste to get a screenshot I let a Level 1 Sorcerer gank me.

No class, no races, just your stats (I'd have to check the source to see what they did!) and a small subset of magic items you can find to battle a subset of monsters from the Monsters & Treasure book. A few traps, some Grey Misty Cubes for teleportation, a random number generator, and there you go.

You had to get back up to the Inn above to turn in your gold to gain XP and level up.

I didn't have a live DM until highschool, though I knew DND from all sorts of computer RPGs - most officially SSI's Gold Box series.

Is that a valid start? I think so. It's certainly the start for kids today - they'll encounter all manner of MMO or other RPG on their PC, tablet, handheld, or phone.

And as I've mentioned before, MMOs are in a lot of ways a headless hex crawl.

And, hopefully when they find the game that started all this fun, it'll be like reading the book a movie was based on - a whole lot more fulfilling.

And that was the action decision for the game, and something I spent a lot of time looking at. That'd make a nice way to describe your pre-initiative choices, actually. I almost named my blog this - I googled it, and it was apparently a now-defunct "furry" DND comic.

Way to spoil my childhood, people.