Randall at Retro Role Playing recently had a post talking about his upcoming Lord & Wizards product, and how he's going to rectify ACKS's proficiencies with what he's wanting to accomplish.

At this point, it would be remiss of me not to mention the Retro Role Playing Cancer Fund. Go there now, and do some good for a guy that's put a lot out into the OSR world, with Microlite74 and associated products. You'll get a download link for a lot of extra Microlite74 goodies, with some real good stuff in them.

I'm super excited that he's basing L&W on ACKS, as it's my system of choice and I'm really looking forward to what he's going to come up with - Microlite74 is informing some of my decisions on boiling ACKS down for my kids. I'm also trying to rectify ACKS proficiencies with how my brain thinks, so it'll be nice to have a comparison point - I got into the OSR a little while back, found ACKS, fell in love with the backend economic systems, but I've flip-flopped a bunch on the proficiency system as-written.

He got me to thinking about it again, and I decided to look into the 'skills' type of ACKS proficiency - where you gain a 50% chance to succeed on your trained task, with possibly the option of taking that proficiency two more times.

ACKS has an "Adventuring" proficiency, given to all PC classes for free, which covers a lot of the basic maintenance skills an adventurer would need out in the field - the interesting text in that proficiency is - "He knows how to ... search for a secret door".

Now there's something with a roll attached to it! Unless you're an elf or took another proficiency, you find secret doors on a roll of 18+. That number also happens to be the default number for Hear Noises and Find Traps (non thieves).

We also know that ACKS decrements the throw required by 4 every time you take a proficiency that can be taken multiple times - 11+, then 7+, then 3+.

We can therefore posit that taking a proficiency that gives you a skill at 11+ grants you 4 points, and then treats you as if you have an 18 in the ability related to that skill - 18+ lowered by 7 is 11+.

Boiling this back up to the Everyman skill roll, we can allow that roll to be modified by ability modifier, if any - a novice is helped by his natural aptitude.

When the character decides to become proficient, any natural aptitude is overridden by the training (you get an 18 for purposes of that skill only), so that the ability score modifier (positive or negative) no longer applies.

It's not quite as permissive as the Crypts & Things use of S&W's single saving throw as a general skill resolution system, as you're not progressing by level. And it's a bit high.


It wouldn't be out of hand to soften that up a bit by allowing a bonus to a roll equal to the character's level or half their level, if the skill is strongly related - a proficiency like Theology (11+ to identify other faith's trappings) is practically begging for a bonus from Cleric levels. At +1/2 levels, a trained 14th level Cleric would only fail on a 3 or less, which is well within the bounds of common sense for someone hopefully as world-wise as that. With an 18 Wisdom, that Cleric would never fail except for circumstance penalties. A Cleric of the same level who's more seat-of-the-pants on his theology knowledge (without the proficiency) with a Wisdom of 16 would roll a 9+. (18 - 7 - 2)

Allowing situational bonuses (like Tracking does) is also a decent idea, though somewhat objective from the DM's viewpoint. Character background may also be good for a bonus of +2 or +4 if strongly correlated - a thief who grew up with a mummer's troupe, even if they didn't take Disguise, should roll at 14+ (18 - 4 - INT mod, if any), and 18+ if the target is very familiar with the subject.

That seat-of-his-pants 14th Cleric might get a +4 if he was orphaned and raised in a monastery, thereby allowing his background to supercede a formal proficiency choice - rolling at a 5+. Taking Theology once would take him down to 3+.

So, we can define an ACKS Progressive General Skill Throw as such:

That's not too bad. Doesn't even need to be on the character sheet. 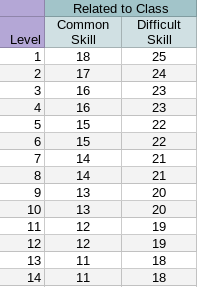 We can complex that up with the table to the right, which includes the 1/2 level related-to-class bonus.

Skills like Contortionism that give a flat 18+ roll, rather than the 11+, can be said to start out at 25+ - effectively impossible if you do not grant any modifiers, whatever their source. That'd fall out being like this next table - things more related to pure ability and experience, and perhaps not something any class would teach you - it'd have to be part of your background. 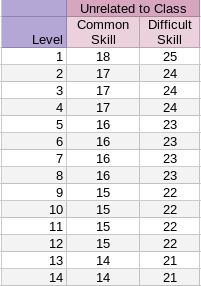 Three others - Acrobatics, Arcane Dabbling, and Loremastery, actually get better with level, but start out around that level - 20+, 18+, and 18+, respectively, though Arcane Dabbling reduces by two per level. Those are also three things that could be strongly considered in the category of "class ability", and have been in other clones and editions of the game.

One could simulate that with allowing the class to start out at first level with 15+, which would represent an extra kick from having experience with the task at hand (having a virtual 18 in an ability) without actual formal training. Extra focus as simulated by taking the relevant proficiency would then drop them to a 8+ (which matches the number for Elves actively searching for secret doors, which tickles my unintended-coincidence bone)

We kind of double up on ability there, but if we're going a step beyond "trained in a skill" to something that's more "class ability", that should gladly incorporate that extra bonus in a game in which PCs are very strongly "classed".

This table more-or-less follows what Crypts & Things does with converting the single save to a skill roll - and is what I'll be following in my project to simplify ACKS up for quick gaming with the kids.

In theory, if you'd want to continue to use the ACKS proficiencies for skills like this, a Cleric taking Theology or a Ranger-type taking Tracking, if you deem either of those a class skill, would take a 7 point bonus to these rolls, starting out at 8+ at first level, and hitting 0+ at 8th, which may or may not work for your own sensibilities.