Prime source is, surprisingly enough, not Indiana Jones. Prime source is a character named Nathaniel Deacon Knibbs, whose player I DM'd for in a 3.5E game, going on some 8 or 9 years ago.

Knibbs was, at level 10,  a (wait for it) Cleric 3, Wizard 1, Rogue 2, Fighter 1, Human Paragon 3. His next ten levels would have been spent in Mystic Theurge. His Wizard side specialized in Enchantment.  Looking at his character sheet, you'd be reminded of the Order of the Stick comic in which Nale realizes he's taken the long road to Bard as a fighter/rogue/sorcerer. It's not as bad as it sounds - the player was canny, and he had good stats. He played himself as the lovable rogue, and was, long term, bent on utilizing his connections with the church to further his own power.


If only we'd had ACKS then! What we could have accomplished with the domain rules!

At any rate. This is somewhat a pale imitation, as I'd really need 5 or 6 class build points (ACKS Player's Companion states 4 for human classes) to do it justice, and Knibbs wouldn't be caught dead being an elf ;) - nor would any multi-class solution true to the spirit of B/X or OD&D really contain the braggadocio of the original build in 3.5E.

Some house rules were used, linked at the end.


Empires rise and fall, civilizations destroy themselves in tragic opulence. Temples are erected, and their gods soon forgotten. Learned sorcerers build massive vaults of knowledge, and suddenly disappear. Ancient, alien creatures leave tantalizing clues about the true nature of the universe behind in cyclopean dungeons.

All these are ripe for exploration and plunder - treasure beyond the dreams of avarice, knowledge never known by mortal.

Fortune Hunters are skilled combatants. At first level, fortune hunters hit an unarmored foe (AC 0) with an attack throw of 10+. They advance in attack throws and saving throws by two points every four levels of experience, as thieves.

Fortune Hunters may wear leather armor or lighter, but may not carry shields. They can fight with a weapon in one hand, or with two weapons simultaneously  but do not favor the bulk of two-handed weapons. In fact, fortune hunters don't spend more time fighting than necessary, and are only familiar with a small subset of weapons, depending on their culture. They choose from any 2 of the following 7 categories: (i) axes; (ii) bows/crossbows; (iii) flails/hammers/maces; (iv) swords/daggers; (v) spears/pole arms; (vi) bolas/darts/nets/slings/saps/staffs; (vii) any combination of 3 weapons. They may use any magical item usable by thieves.

At 1st level, fortune hunters are ready to make a name for themselves. They may find traps which infest ancient temples and tombs as a thief of their level. Their eye for detail allows them to detect secret doors with a throw of 8+ when actively searching, or a 14+ on casual inspection. Fortune hunters are always on their toes, and gain a +1 to initiative (not during spellcasting) and surprise. They are ready in spirit and mind - they can identify ancient runes, old legends, and other feats of loremastery on a throw of 18+, which reduces by one per level. More immediately practical knowledge helps them face the wandering dead that occupy ruins the world over - fortune hunters have studied the incantations and rituals necessary to allow them to turn undead as a cleric of 1/4 their level (or as depicted by the Divine Caster Level on the table below)

Fortune hunters steep themselves in ancient lore. At 3rd level, they may read languages as a thief, with a proficiency throw of 5+. At 5th level, they've collected a number of totems and fetishes from various cults and religions, and the resultant effect is a +2 bonus on all saving throws. At 7th level, fortune hunters may read and cast from divine scrolls with a proficiency throw of 3+, with failure resulting in some backfire effect as determined by the GM.

Fortune hunters deal in boldness - at 5th level, their confidence and aptitude inspire a +1 morale bonus in any henchmen they lead in their adventures. At 9th level, the fortune hunter may establish an institution, part stronghold, part museum, part university. When he does so, up to 1d4+1 * 10 0th level mercenaries and 1d6 fortune hunters of 1st-3rd level will come to apply for positions and learning. If hired, they must be paid standard rates. 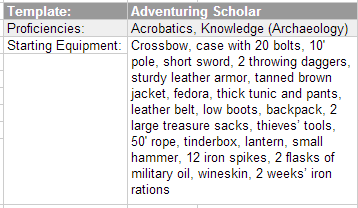 Aventuring Scholar Template: This pre-generated template represents an adventuring scholar, who believes if you want to be a good archaeologist, you've got to get out of the library. The template is ready for adventure. However, if your fortune hunter's INT is 13 or greater, you may pick one or more additional general proficiencies before play (see Starting Proficincies in Chapter 4 of the ACKS Core Rulebook)

DESIGN NOTES: I reskinned Read and Cast from Arcane Scrolls to a divine version, under the theory that since the class has arcane spellcasting, it's covered from that angle. The fortune hunter gets it a bit earlier, but since divine scrolls are around half as likely as arcane I suppose it balances out.
ACKS BUILD POINTS: Hit Dice 1, Fighting 1a, Thievery 1, Half-Value Spellcasting 1
TRADEOFFS: 3 Thief skills - 2 traded for skills at 3,5,7. 1 from Fighting Style (shield), Armor from Unrestricted to Narrow for 2 more custom powers.
HOUSE RULES USED: Half Value Spellcasting, turned Read/Cast Arcane Scrolls into a Divine version.