The System of Surprise, or, Switzer's Cat

What is surprise? The usual definition in DND is what it provides in combat - the extra round or more with which one can attack with impunity, often with bonuses.

However, let's look at it another way - let's say some things are more surprising than others. Traps, for example, are built to be surprising - certainly more so than coming upon an orc in a dungeon.

It's not a new idea, a quick Google search presents other folks thinking in the same way. Let's forge ahead anyway.


Who deals in surprise the most? Thieves.

Let's look at the non-magic-related Thief skills and see how they may relate to surprise:


So. Take especially the example of Open Lock. It's not a 'skill' anymore - we make no implication that the thief of whatever level won't eventually pick that lock. We only care if he managed to do it in a way that maintains surprise on what's on the other side - be it a monster or a trap he's not setting off with his gentle maneuverings.

We're putting it on the environment - traps are more surprising than encounters. It's harder to surprise someone sneaking up (because you're already within encounter surprise distance). It's easy to miss clues someone's around the next corner (to hear them coming - hearing is an inaccurate sense). The environment itself (a loose brick, a bump in the carpet) is about as surprising as an encounter though.

Now, for all intents and purposes, my post is done. We've reworked what I've seen a lot of forum and blog posts on (regarding thief skills, their descriptions and use) into an extension of the surprise mechanic.

Whether you'd reduce the thief skill percentile tables down into d6, or raise the d6 surprise to percentile (or meet in the middle at d12 or d20, as ASSH and ACKS do) is all up to you.

The fact that it's all the same numbers still makes it all semantics, which is the best kind of change.

But, I've got this shovel and this shallow hole, so let's keep going.

The Cat in Play

We've now distilled surprise into 5 separate types. Let's see some examples for each, used in the same manner and form as the thief skills that inspired them.


OK. So, let's throw out some tables. I'm basing this on Cook Expert as common enough reference, convert as appropriate from your system's thief tables. 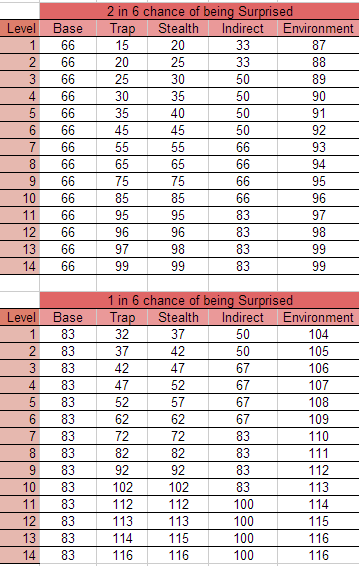 Note the second table. That's what happens if you allow someone who's Base surprise is only 1:6 to percolate up to the narrower surprise categories. Useful? Maybe.

I think there's some design space here in moving classes to this system that say "this class is hard to surprise in this manner". For example, let's note the Ranger. Let's say he gets 2 slots to spend on Surprise - he's probably want Base,  Trap, and Stealth. He'll buy Base with one point, and take Trap and Stealth at half a point each, as he'll choose to only have them available in the wilderness. This Ranger would have a base surprise at 1:6, and in wilderness environments, have Trap and Stealth as a thief of his level. (15% and 20% at level 1).

Give the thief 5 points. Maybe he'll drop Environment surprise altogether in order to get a boost to Stealth or Indirect. Any Elf class could take 2 points and take Base and Indirect, to be true to form. A Dwarf could take Trap & Indirect, underground only, then Environment, perhaps. A 3E style Barbarian would take Trap Surprise (they gained a +1 Reflex vs traps every few levels).


Let's convert the above tables to roll-at-on-d20, and add another column, inverting Environment Surprise (which was Climb Walls): 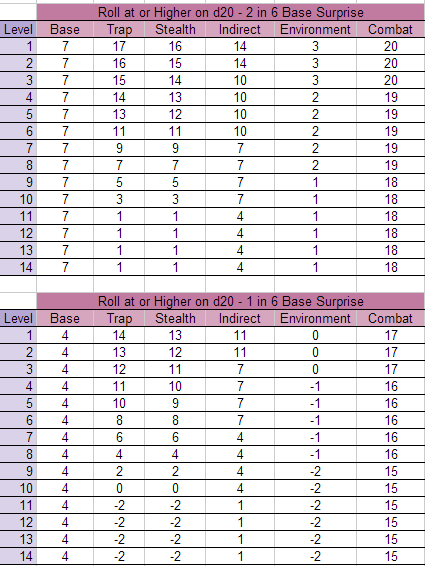 I've called it Combat Surprise. Let's take a page from the DCC RPG, where Mighty Deeds are done. Assume a Fighter takes Base Surprise and Combat Surprise with his two points. At first level, on an attack roll of 20, he's gained Combat Surprise on his foe, and can do something special, perhaps - something on the level of the lowest set of results from DCC RPG's - imposing a -2 to the foe's next attack with a hard parry, knocking the foe back out of melee range with a shield bash, a -2 penalty to the foe's AC next round by knocking it off-balance, some flashy "Are You Not Entertained?" maneuver that rallies flagging henchmen, or declaring some sort of precision strike. Maybe a thief or assassin with Combat Surprise can take a penalty to AC the next round in exchange for some bold maneuver that grants her a backstab against her target.

As in DCC RPG, of course, this only counts if it hits.

As a comparison, the next two tables are a collection of Climb Walls percentages inverted into Combat Surprise, both in roll-to-on-d20 format and percentile chance. The DCC column is the roll-to that the corresponding Deed Die for that level will come up 3, we're assuming the actual attack hit. 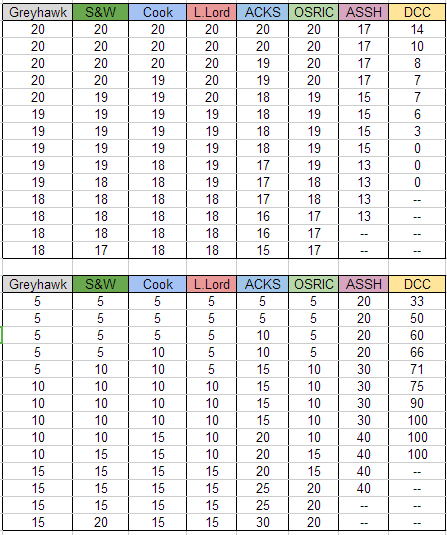 So, it's about as likely as falling off a wall, and we can say that literally, since these are the inverted Climb Walls percentages. We're nowhere near the flashiness of DCC combat, but there's a little extra something in there for a good roll. An Astonishing Swordsman in Hyperborea does stay astonishing, though.

Plus it's more entertaining than some sort of max damage/double damage on a natural 20.

So, that's our sixth form of surprise - Combat Surprise. Dangerous in the right hands.

To close, the Surprise table on the regular X-in-6 chances, again using Cook Expert, with Combat Surprise on a d20.  Note Indirect Surprise is an inversion of Cook's Hear Noise. Since we're rolling high, one could take the 1st level numbers and move forward with Skills: The Middle Road instead. 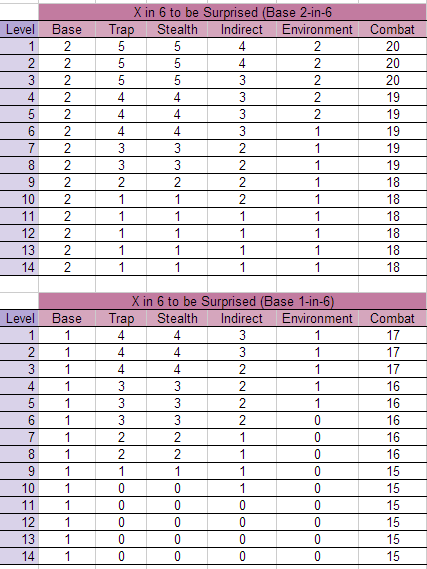