Where the Shadow lies

Mordor and Mirkwood got the way they were because of the presence of Sauron.

Presume for the moment that an Sauron-like entity - or whatever, honestly - produces a 'sinkhole of evil' effect that extends for miles, probably based on its HD or whatever apparent power level you assign.

That effect is a negative modifier to the d12 encounter table roll.

You then extend your d12 encounter table for the region into the negatives - however far you need to go - so that you can resolve rolls like "-3" to, say, orcs. Or evil spiders. And that's what the party encounters more often until such time as the Shadow is resolved/eliminated/depowered.

This has two excellent consequences:

- Modifying the encounter tables also modifies the monster settlement patterns, as that also gives you lairs when generating an area, or Wandering Into War results.

- The Abstract Dungeon adventuring rules use a "d8+d12" roll for resolution - the same roll as a wandering encounter - and therefore using that same negative modifier makes dungeons within reach of the Shadow more dangerous.

So, if I were to flesh this out in the future, I'd do something like:

- Evil presence "pushes" a negative modifier out to a distance based on its HD and a distance comparable to what a PC of equivalent HD might rule - so Sauron can cover the land of Mordor based on the fact that a ??HD PC could rule an empire.

- That presence pushes out over a time period based off the mercenary recruitment charts, maybe.

- The negatives increase closer to the source, again based on something derived from domain control.

- Abstract dungeons/lairs in the area inherit the negative modifier.

- When defeated, the modifiers reverse themselves on the same schedule, though any existing lairs remain. I expect I'd want to figure out how to reduce the negative modifiers on dungeons/lairs at a slower rate.

I'd have to cogitate more on how to manage the encounter rolls while lairs/dungeons that remain shadowed still exist in the area. 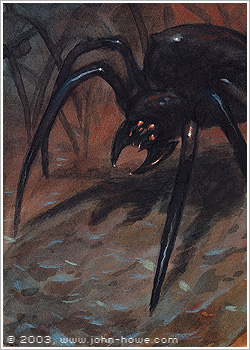 
Posted by Koewn at 6:26 AM No comments: Links to this post